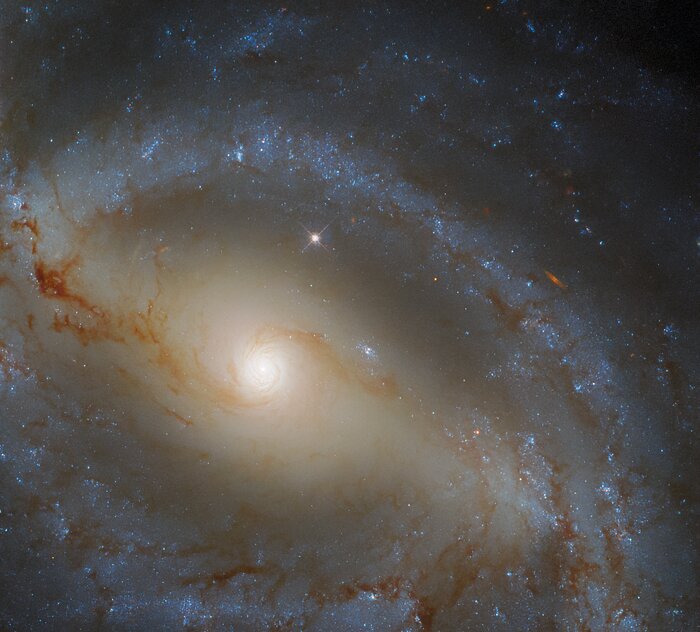 The lazily winding spiral arms of the galaxy NGC 5921 snake across this image from the NASA/ESA Hubble Space Telescope. This galaxy lies approximately 80 million light-years from Earth, and much like our own galaxy, the Milky Way, contains a prominent bar. Roughly half of all spiral galaxies are thought to contain bars, and these bars affect their parent galaxies by fuelling star formation and affecting the motion of stars and interstellar gas.

Appropriately, given NGC 5921’s serpentine spiral arms, this galaxy resides in the constellation Serpens in the northern celestial hemisphere. Serpens is the only one of the 88 modern constellations to consist of two unconnected regions — Serpens Caput and Serpens Cauda. These two regions — whose names mean the Serpent’s Head and the Serpent’s Tail, respectively — are separated by Ophiuchus, the Serpent Bearer.

The scientific study behind this image was also split into two parts — observations from Hubble’s Wide Field Camera 3 and observations from the ground-based Gemini Observatory. These two observatories joined forces to better understand the relationship between galaxies like NGC 5921 and the supermassive black holes they contain. Hubble’s contribution to the study was to determine the masses of stars in the galaxies and also to take measurements that help calibrate the observations from Gemini. Together, the Hubble and Gemini observations provided astronomers with a census of nearby supermassive black holes in a diverse variety of galaxies.