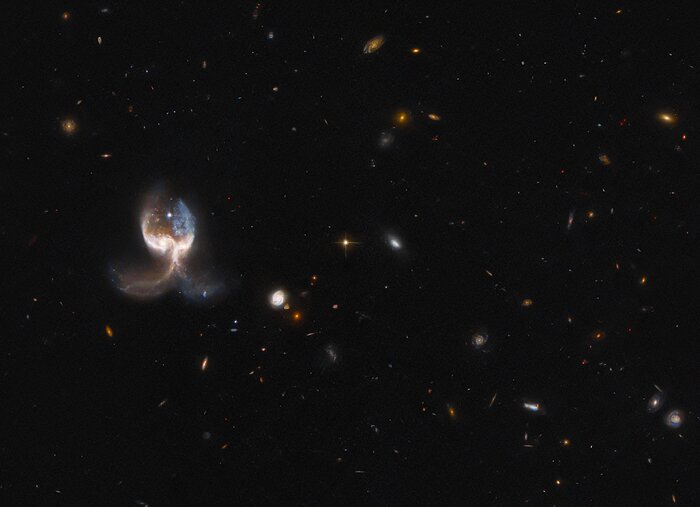 Two merging galaxies in the VV689 system — nicknamed the Angel Wing —feature in this image from the NASA/ESA Hubble Space Telescope. Unlike chance alignments of galaxies which only appear to overlap as seen from our vantage point on Earth, the two galaxies in VV689 are in the midst of a collision. The galactic interaction has left the VV689 system almost completely symmetrical, giving the impression of a vast set of galactic wings.

This angelic image comes from a set of Hubble observations inspecting the highlights of the Galaxy Zoo citizen science project. This crowdsourced astronomy project relied on hundreds of thousands of volunteers to classify galaxies and help astronomers wade through a deluge of data from robotic telescopes. In the process, volunteers discovered a rogues’ gallery of weird and wonderful galaxy types, some of which had not previously been studied. A similar, ongoing project called Radio Galaxy Zoo is using the same crowdsourcing approach to locate supermassive black holes in distant galaxies.

Noteworthy objects from both projects were chosen for detailed follow-up observations with Hubble’s Advanced Camera for Surveys. In keeping with the crowdsourced nature of the Galaxy Zoo project, the targets for follow-up observations with Hubble were chosen via roughly 18 000 votes cast by the public. The selected targets include ring-shaped galaxies, unusual spirals, and a striking selection of galaxy mergers such as VV689.