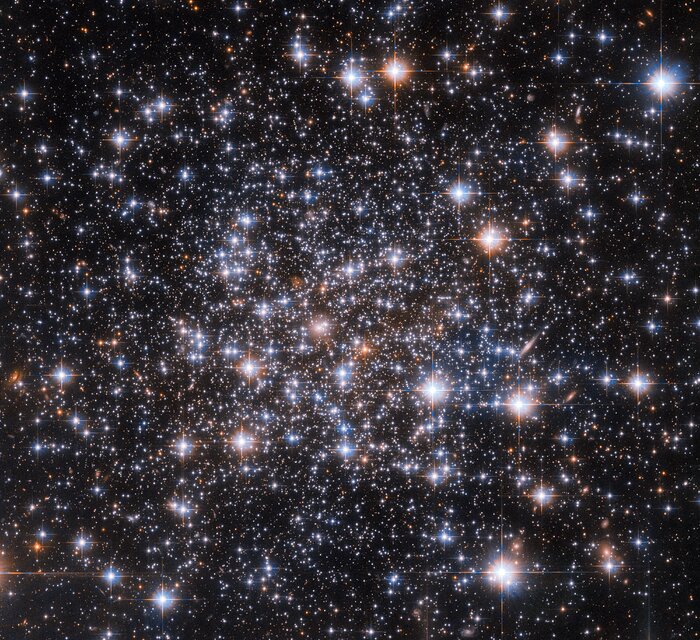 Like Sherlock Holmes’s magnifying glass writ large, the NASA/ESA Hubble Space Telescope has been used to peer into an astronomical mystery in search of clues. The enigma in question concerns the globular cluster Ruprecht 106, which is pictured in this image. While the constituent stars of globular clusters all formed at approximately the same location and time, it turns out that almost all globular clusters contain groups of stars with distinct chemical compositions. These distinct chemical fingerprints are left by groups of stars with very slightly different ages or compositions from the rest of the cluster. A tiny handful of globular clusters do not possess these multiple populations of stars, and Ruprecht 106 is a member of this enigmatic group.

Hubble captured this star-studded image using one of its most versatile instruments; the Advanced Camera for Surveys (ACS). Much like the stars in globular clusters, Hubble’s instruments also have distinct generations: ACS is a third generation instrument which replaced the original Faint Object Camera in 2002. Some of Hubble’s other instruments have also gone through three iterations: the Wide Field Camera 3 replaced the Wide Field and Planetary Camera 2 (WFPC2) during the final servicing mission to Hubble. WFPC2 itself replaced the original Wide Field and Planetary Camera, which was installed on Hubble at launch.

Astronauts on the NASA Space Shuttle serviced Hubble in orbit a total of five times, and were able to either upgrade aging equipment or replace instruments with newer, more capable versions. This high-tech tinkering in low Earth orbit has helped keep Hubble at the cutting edge of astronomy for more than 3 decades.