Delving into an Astronomical Treasure Trove 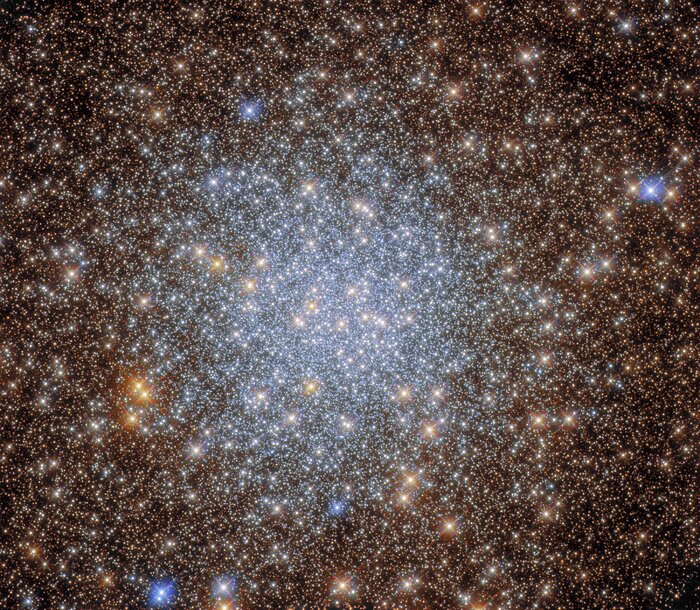 This image from the NASA/ESA Hubble Space Telescope captures the sparkling globular cluster NGC 6569 in the constellation Sagittarius. Hubble explored the heart of this cluster with both its Wide Field Camera 3 and Advanced Camera for Surveys, revealing a glittering hoard of stars in this astronomical treasure trove.

Globular clusters are stable, tightly bound clusters containing tens of thousands to millions of stars, and are associated with all types of galaxies. The intense gravitational attraction of these closely packed clusters of stars means that globular clusters have a regular spherical shape with a densely populated centre — as can be seen in the heart of this star-studded image.

This observation comes from an investigation of globular clusters which lie close to the centre of the Milky Way. These objects have been avoided in previous surveys, as the dust spread throughout  the centre of our galaxy blocks light from these globular clusters and alters the colours of the stars residing in them. The last factor is particularly important for astronomers studying stellar evolution, as the colours of stars can give astronomers insights into their ages, compositions, and temperatures.

The astronomers who proposed these observations combined data from Hubble with data from astronomical archives, allowing them to measure the ages of globular clusters including NGC 6569. Their research also provided insights into the structure and density of globular clusters towards the centre of the Milky Way.