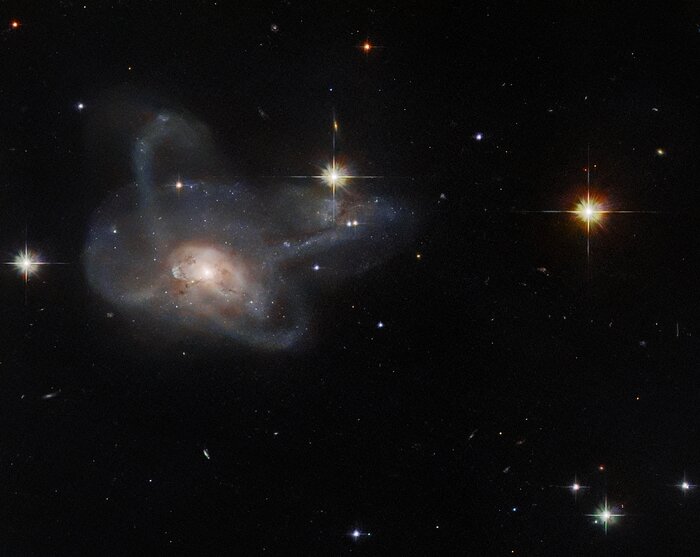 This NASA/ESA Hubble Space Telescope observation has captured the galaxy CGCG 396-2, an unusual multi-armed galaxy merger which lies around 520 million light-years from Earth in the constellation Orion.

This observation is a gem from the Galaxy Zoo project, a citizen science project in which hundreds of thousands of volunteers classified galaxies to help scientists solve a problem of astronomical proportions — how to sort through the vast amounts of data generated by robotic telescopes. Following a public vote, a selection of the most astronomically intriguing objects from the Galaxy Zoo were selected for follow-up observations with Hubble. CGCG 396-2 is one such object, and was captured in this image by Hubble’s Advanced Camera for Surveys.

The Galaxy Zoo project originated when an astronomer was set an impossibly mind-numbing task; classifying more than 900 000 galaxies by eye. By making a web interface and inviting citizen scientists to contribute to the challenge, the Galaxy Zoo team was able to crowdsource the analysis, and within six months a legion of 100 000 volunteer citizen astronomers had contributed more than 40 million galaxy classifications.
Since its initial success, the Galaxy Zoo project and its successor projects have contributed to more than 100 peer-reviewed scientific articles and led to a rich variety of intriguing astronomical discoveries above and beyond their initial goals. The success of the project also inspired more than 100 citizen science projects on the Zooniverse portal, ranging from analysing data from the ESA Rosetta spacecraft's visit to Comet 67P/Churyumov–Gerasimenko to counting killer whales around remote Alaskan islands!