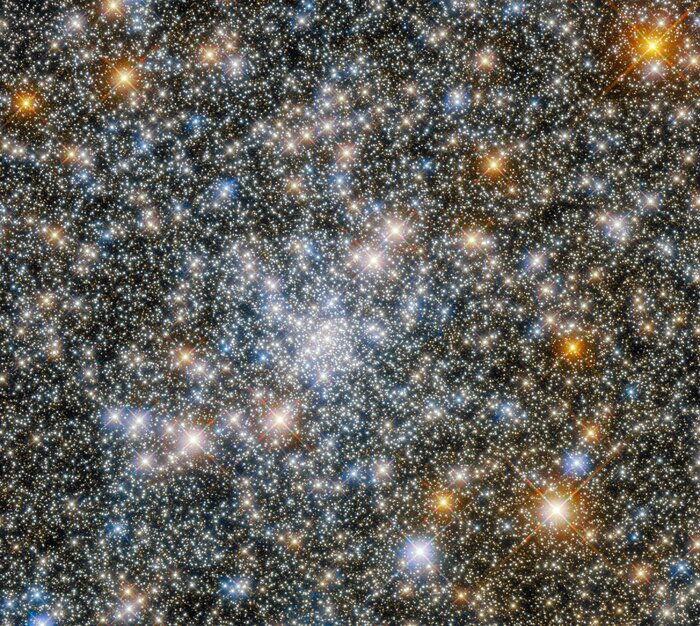 This scintillating image showcases the globular cluster NGC 6540 in the constellation Sagittarius, which was captured by the NASA/ESA Hubble Space Telescope’s Wide Field Camera 3 and Advanced Camera for Surveys. These two instruments have slightly different fields of view — which determines how large an area of sky each instrument captures. This composite image shows the star-studded area of sky that was captured in both instruments’ field of view.

NGC 6540 is a globular cluster, a stable, tightly bound multitude of stars. The populations of these clusters can range from tens of thousands to millions of stars, all of which are trapped in a closely-packed group by their mutual gravitational attraction.

The brightest stars in this image are adorned with prominent cross-shaped patterns of light known as diffraction spikes. These astronomical embellishments are a type of imaging artefact, meaning that they are caused by the structure of Hubble rather than the stars themselves. The path taken by the starlight as it enters the telescope is slightly disturbed by its internal structure, causing bright objects to be surrounded by spikes of light.

Hubble peered into the heart of NGC 6540 to help astronomers measure the ages, shapes, and structures of globular clusters towards the centre of the Milky Way. The gas and dust shrouding the centre of our galaxy block some of the light from these clusters, as well as subtly changing the colours of their stars. Globular clusters contain insights into the earliest history of the Milky Way, and so studying them can help astronomers understand how our galaxy has evolved.