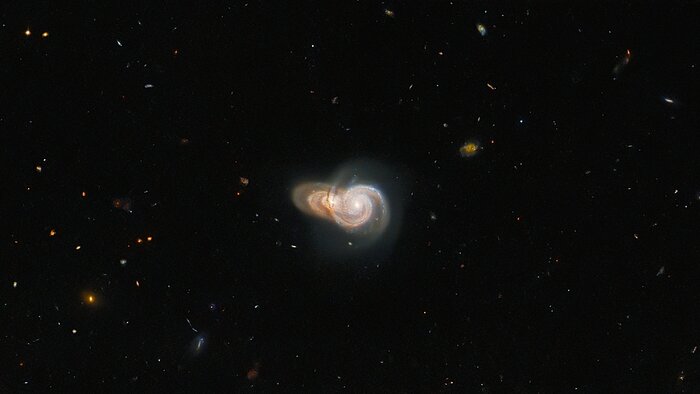 Two overlapping spiral galaxies are pictured in this image from the NASA/ESA Hubble Space Telescope. The two galaxies, which have the uninspiring names SDSS J115331 and LEDA 2073461, lie more than a billion light-years from Earth. Despite appearing to collide in this image, the alignment of the two galaxies is likely just by chance — the two are not actually interacting. While these two galaxies might simply be ships that pass in the night, Hubble has captured a dazzling array of interacting galaxies in the past.

This image is one of many Hubble observations delving into highlights of the Galaxy Zoo project. Originally established in 2007, the Galaxy Zoo project and its successors are massive citizen science projects which crowdsource galaxy classifications from a pool of hundreds of thousands of volunteers. These volunteers classify galaxies imaged by robotic telescopes and are often the first to ever set eyes on an astronomical object.

Over the course of the original Galaxy Zoo project, volunteers discovered a menagerie of weird and wonderful galaxies such as unusual 3-armed spiral galaxies and colliding ring galaxies. The astronomers coordinating the project applied for Hubble time to observe the most unusual inhabitants of the Galaxy Zoo — but true to the project’s crowdsourced roots, the list of targets was chosen by a public vote.