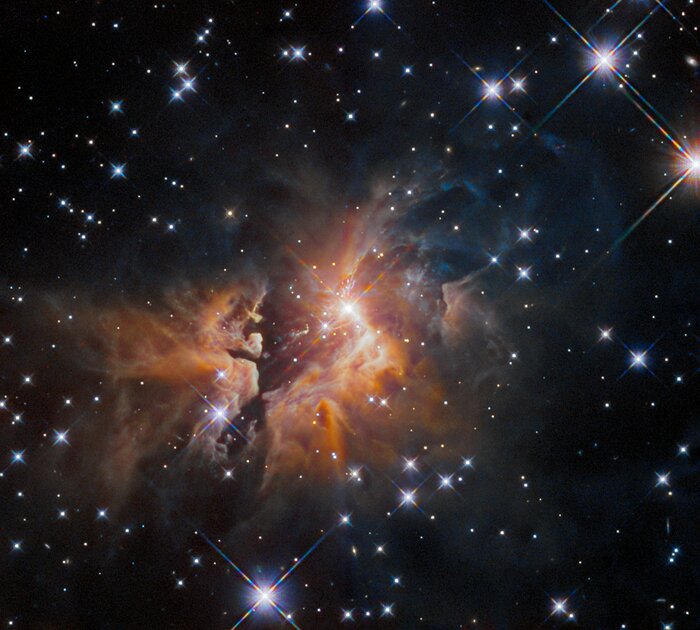 A bright young star is surrounded by a shroud of thick gas and dust in this image from the NASA/ESA Hubble Space Telescope. Hubble’s Wide Field Camera 3 inspected a young stellar object, over 9000 light years away in the constellation Taurus, to help astronomers understand the earliest stages in the lives of massive stars. This object — which is known to astronomers as IRAS 05506+2414 — is thought to be an example of an explosive event caused by the disruption of a massive young star system. If so, it would only be the second such example known.

Usually the swirling discs of material surrounding a young star are funnelled into twin outflows of gas and dust from the star. In the case of IRAS 05506+2414, however, a fan-like spray of material travelling at velocities of up to 350 kilometres per second is spreading outwards from the centre of this image.

Astronomers turned to Hubble’s Wide Field Camera 3 to measure the distance to IRAS 05506+2414. While it is possible to measure the velocity of material speeding outwards from the star, astronomers cannot tell how far from Earth the star actually is from a single observation. However, by measuring the distance that the outflow travels between successive images, they will be able to infer the distance to IRAS 05506+2414. This will allow astronomers to determine how bright the star is and how much energy it is emitting, and hence to estimate its mass — all vital information that will help to understand the origin of this bright young star’s unusual outflow.