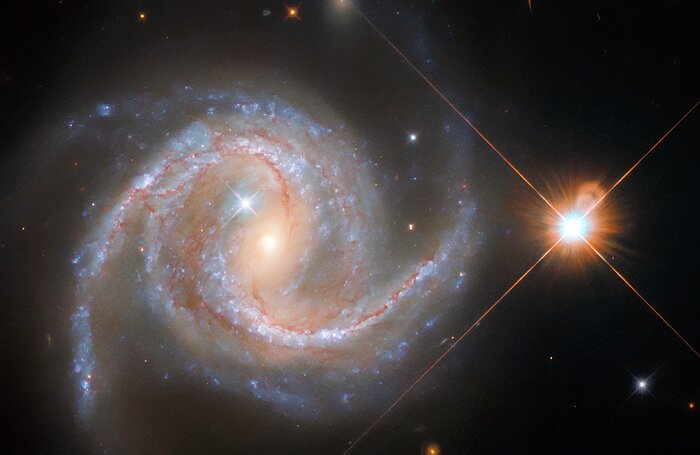 The stately sweeping spiral arms of the spiral galaxy NGC 5495 are revealed by the NASA/ESA Hubble Space Telescope’s Wide Field Camera 3 in this image. NGC 5495, which lies around 300 million light-years from Earth in the constellation Hydra, is a Seyfert galaxy, a type of galaxy with a particularly bright central region. These luminous cores — known to astronomers as active galactic nuclei — are dominated by the light emitted by dust and gas falling into a supermassive black hole.

As well as NGC 5495, two stellar interlopers are visible in this image. One is just outside the centre of NGC 5495, and the other is very prominent alongside the galaxy. While they share the same location on the sky, these objects are much closer to home than NGC 5495: they are stars from our own Milky Way. The bright stars are surrounded by criss-cross diffraction spikes, optical artefacts created by the internal structure of Hubble interacting with starlight.