A Snapshot of Interacting Galaxies 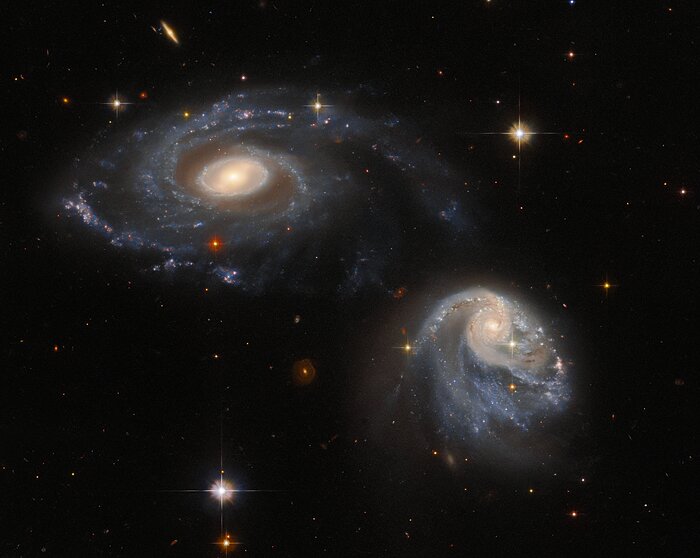 The two interacting galaxies making up the pair known as Arp-Madore 608-333 seem to float side by side in this image from the NASA/ESA Hubble Space Telescope. Though they appear serene and unperturbed, the two are subtly warping one another through a mutual gravitational interaction that is disrupting and distorting both galaxies. This drawn-out galactic interaction was captured by Hubble’s Advanced Camera for Surveys.

The interacting galaxies in Arp-Madore 608-333 were captured as part of an effort to build up an archive of interesting targets for more detailed future study with Hubble, ground-based telescopes, and the NASA/ESA/CSA James Webb Space Telescope. To build up this archive, astronomers scoured existing astronomical catalogues for a list of targets spread throughout the night sky. By so doing, they hoped to include objects that had already been identified as interesting and that would be easy for Hubble to observe no matter which direction it was pointing.

Deciding how to award Hubble observing time is a drawn-out, competitive and difficult process, and the observations are allocated so as to use every last second of Hubble time available. However, there is a small but persistent fraction of time — around 2–3% — that goes unused as Hubble turns to point at new targets. Snapshot programmes, such as the one which captured Arp-Madore 608-333, exist to fill this gap and take advantage of the moments between longer observations. As well as creating beautiful images such as this, these snapshot programs enable astronomers to gather as much data as possible with Hubble.