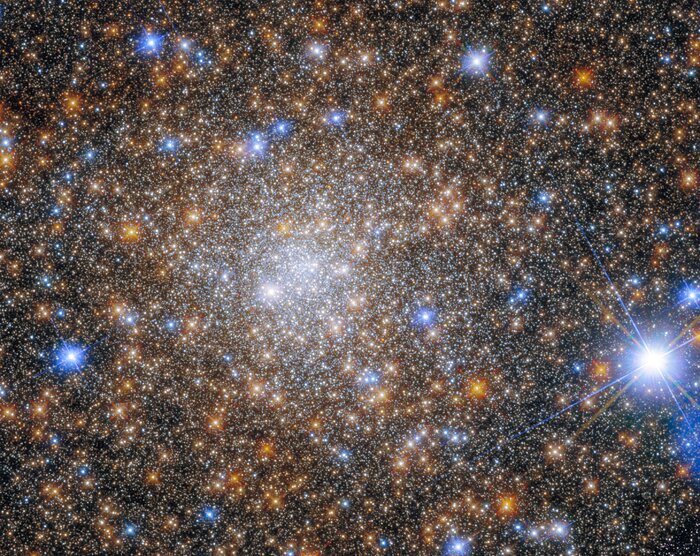 Terzan 1 is a globular cluster that lies about 22,000 light-years from Earth in the constellation Scorpius. It is one of 11 globular clusters that were discovered by the Turkish-Armenian astronomer Agop Terzan between 1966 and 1971 when he was working in France, based mostly at Lyon Observatory.

Somewhat confusingly, the 11 Terzan globular clusters are numbered from Terzan 1 to Terzan 12. This is due to an error made by Terzan in 1971, when he rediscovered Terzan 5 — a cluster he had already discovered and reported back in 1968 — and named it Terzan 11. He published its discovery alongside those of Terzan 9, 10 and 12. He quickly realised his mistake, and attempted to have Terzan 12 renamed as Terzan 11. Unfortunately, he did not make it clear that Terzan 5 and Terzan 11 were one and the same, although another astronomer, Ivan Robert King, did publish a note to try and clear up the confusion. Nowadays, most papers recognise the original Terzan 5 and Terzan 12, and accept the oddity that there is no Terzan 11. There have, however, been instances of confusion in the scientific literature over the past few decades.

Terzan 1 is not a new target for Hubble — an image of the cluster was released back in 2015, taken by Hubble’s Wide Field Planetary Camera 2 (WFPC2). That instrument was replaced by the Wide Field Camera 3 (WFC3) during the 2009 Hubble servicing mission. WFC3 has both superior resolving power and a wider field of view than WFPC2, and the improvement is obvious in this fantastically detailed image.