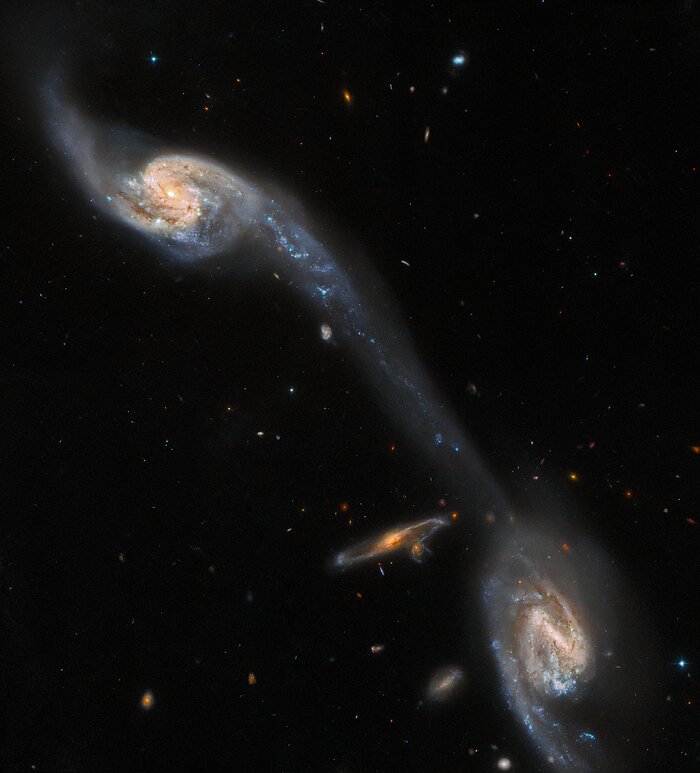 This image from the NASA/ESA Hubble Space Telescope shows two of the galaxies in the galactic triplet Arp 248 — also known as Wild's Triplet — which lies around 200 million light-years from Earth in the constellation Virgo. The two large spiral galaxies visible in this image — which flank a smaller, unrelated background spiral galaxy — seem to be connected by a luminous bridge. This elongated stream of stars and interstellar dust is known as a tidal tail, and it was formed by the mutual gravitational attraction of the two foreground galaxies.

This observation comes from a project which delves into two rogues’ galleries of weird and wonderful galaxies: A Catalogue Of Southern Peculiar Galaxies And Associations, compiled by astronomers Halton Arp and Barry Madore, and the Atlas of Peculiar Galaxies, compiled by Halton Arp. Each collection contains a menagerie of spectacularly peculiar galaxies, including interacting galaxies such as Arp 248, as well as one- or three-armed spiral galaxies, galaxies with shell-like structures, and a variety of other space oddities.

Hubble used its Advanced Camera for Surveys to scour this menagerie of eccentric galaxies in search of promising candidates for future observations with the NASA/ESA/CSA James Webb Space Telescope, the Atacama Large Millimeter/submillimeter Array, and Hubble itself. With such a wealth of astronomical objects to study in the night sky, projects such as this, which guide future observations, are a valuable investment of observing time. As well as the scientific merits of observing these weird and wonderful galaxies, they were also — very unusually — selected as Hubble targets because of their visual appeal to the general public!

[Image description: Two spiral galaxies are viewed almost face-on; they are a mix of pale blue and yellow in colour, crossed by strands of dark red dust. They lie in the upper-left and lower-right corners. A long, faint streak of pale blue joins them, extending from an arm of one galaxy and crossing the field diagonally. A small spiral galaxy, orange in colour, is visible edge-on, left of the lower galaxy.]