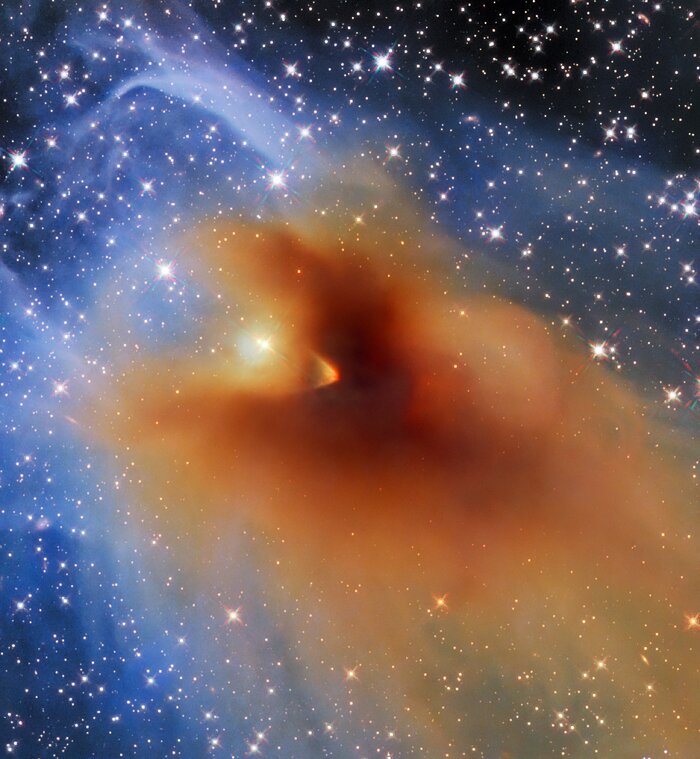 A small, dense cloud of gas and dust called CB 130-3 blots out the centre of this image from the NASA/ESA Hubble Space Telescope. CB 130-3 is an object known as a dense core, a compact agglomeration of gas and dust. This particular dense core is in the constellation Serpens, and seems to billow across a field of background stars.

Dense cores like CB 130-3 are the birthplaces of stars, and as such are of particular interest to astronomers. During the collapse of these cores enough mass can accumulate in one place to reach the temperatures and densities required to ignite hydrogen fusion, marking the birth of a new star. While it may not be obvious from this image, a compact object teetering on the brink of becoming a fully fledged star is embedded deep within CB 130-3.

Astronomers used Hubble’s Wide Field Camera 3 to better understand the environment surrounding this fledgling star. As this image shows, the density of CB 130-3 isn’t constant; the outer edges of the cloud consist of only tenuous wisps, whereas at its core CB 130-3 blots out background light entirely. The gas and dust making up CB 130-3 affect not only the brightness but also the colour of background stars, with stars towards the centre the cloud appearing redder than their counterparts at the outskirts of this image. Astronomers used Hubble to measure this reddening effect and chart out the density of CB 130-3, providing insights into the inner structure of this stellar nursery.

[Image description: The image shows an irregularly-shaped bright orange object composed of dense gas and dust, which appears darker and more compact at the centre. This dense cloud, called CB 130-3, is outlined by thinner gas and dust in light shades of blue. The background shows a multitude of bright stars against a black background.]