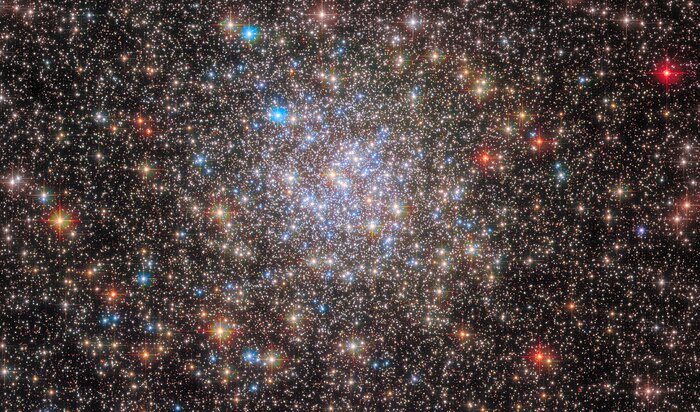 The scattered stars of the globular cluster NGC 6355 are strewn across this image from the NASA/ESA Hubble Space Telescope. This globular cluster lies less than 50,000 light-years from Earth in the Ophiuchus constellation. NGC 6355 is a galactic globular cluster that resides in our Milky Way galaxy's inner regions.

Globular clusters are stable, tightly bound clusters of tens of thousands to millions of stars, and can be found in all types of galaxies. Their dense populations of stars and mutual gravitational attraction give these clusters a roughly spherical shape, with a bright concentration of stars surrounded by an increasingly sparse sprinkling of stars. The dense, bright core of NGC 6355 was picked out in crystal-clear detail by Hubble in this image, and is the crowded area of stars towards the centre of this image.

With its vantage point above the distortions of the atmosphere, Hubble has revolutionised the study of globular clusters. It is almost impossible to distinguish the stars in globular clusters from one another with ground-based telescopes, but astronomers have been able to use Hubble to study the constituent stars of globular clusters in detail. This Hubble image of NGC 6355 contains data from both the Advanced Camera for Surveys and Wide Field Camera 3.

[Image description: A dense collection of stars covers the view. Towards the centre the stars become even more dense in a circular region, and also more blue. Around the edges there are some redder foreground stars, and many small stars in the background.]