Calling on a Galactic Neighbour 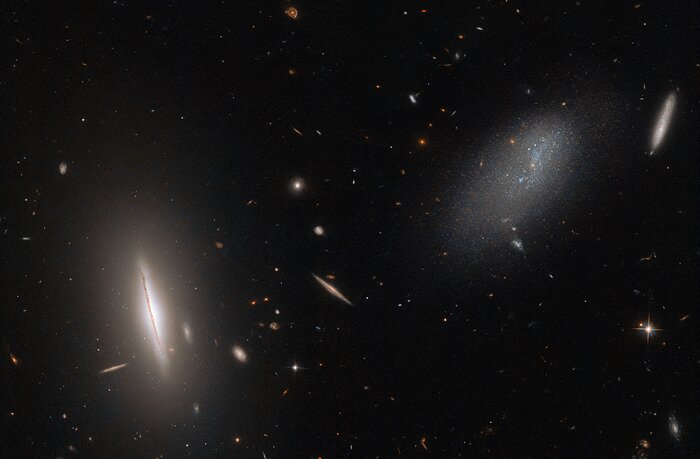 This image from the NASA/ESA Hubble Space Telescope features the galaxy LEDA 48062 in the constellation Canes Venatici. LEDA 48062 is the faint, sparse, amorphous galaxy on the right side of this image, and it is accompanied by a more sharply defined neighbour on the left, the large, disc-like lenticular galaxy UGC 8603. A smattering of more distant galaxies also litter the background, and a handful of foreground stars are also visible throughout the image.

Have you ever wondered why the stars in Hubble images are surrounded by four sharp points? These are called diffraction spikes, and are created when starlight diffracts — or spreads around — the support structures inside reflecting telescopes like Hubble. The four spikes are due to the four thin vanes supporting Hubble’s secondary mirror and are only noticeable for bright objects like stars where a lot of light is concentrated on one spot. Darker, more spread-out objects like the galaxies LEDA 48062 and UGC 8603 do not possess visible diffraction spikes.

Hubble recently spent some time with our galactic neighbours. LEDA 48062 is only around 30 million light-years from the Milky Way, and was therefore included in the observing campaign Every Known Nearby Galaxy. The aim of this campaign was to observe precisely that: every known galaxy within 10 megaparsecs (around 33 million light-years) of the Milky Way. By getting to know our galactic neighbours, astronomers can determine what types of stars reside in various galaxies and also map out the local structure of the Universe.

[Image description: A faint, scattered collection of cool stars in the form of an irregular galaxy lies right of centre. A disc-shaped galaxy viewed nearly edge-on lies to the left, surrounded by a wide glow. Several smaller galaxies in various orientations cluster around the two. The background is black and mostly empty.]