A group of European astronomers have obtained the first detailed images of a galaxy in which a gamma-ray burst has occurred. The image was taken with one of the NASA/ESA Hubble Space Telescope's high-resolution cameras and reveals a barred spiral galaxy with numerous star-forming regions. The gamma-ray burst has been located in one such actively star-forming region. This is a very important step forward in our understanding of gamma-ray bursts and their immediate surroundings and offers possible clues to their progenitors.

A special event took place on 25 April 1998. A gamma-ray burst occurred in a galaxy a mere 125 million light years away - cosmically speaking, our 'backyard'. Gamma-ray bursts emit very intense gamma-ray radiation for short periods and are observed a few times per day by special gamma-ray detectors on observatories in space. International spacecraft have collected information on about 3,000 of these bursts since their discovery in 1967 and today we know that they originate in galaxies - often at large distances. However, the exact nature of these mysterious objects has eluded scientists. The many different theories explaining their occurrence all involve violent and highly energetic phenomena and range from colliding neutron stars to collapsing massive stars, the so-called hypernovae.

The story of this burst, named GRB 980425 by the astronomers, is an unusual one. It was far closer than any other gamma-ray burst for which a distance has been determined and thus must have been 1000 to 1,000,000 times fainter than normal bursts. Moreover an unusually bright supernova (SN 1998bw) - it is the current record-holder at radio wavelengths - was seen in exactly the same location merely a day after the burst. Altogether a most unusual event!

Several groups of astronomers have followed the development of this event closely over the last two years. The fading light from the powerful exotic supernova has been monitored carefully. On 12 June this year a group of European astronomers obtained very detailed observations of the host galaxy ESO 184-G82 for this gamma-ray burst - the first time such a galaxy has been observed in such fine detail. The observations are of extremely high quality and were taken with one of the NASA/ESA Hubble Space Telescope's high-resolution cameras, the Space Telescope Imaging Spectrograph (STIS).

Nearly 20 host galaxies have been observed since the first galaxies hosting gamma-ray bursts were detected about three years ago. However, these are usually thousands of million light years away and hence much too small and faint to be observed in detail - even with Hubble's high resolution. The new observations allow scientists to investigate the phenomenon in much greater detail. They show that the host galaxy is actively star-forming and contains numerous clouds of hydrogen and regions teeming with activity from newly born hot stars. The galaxy is a spiral with loosely wound spiral arms and a large bar of gas and dust running through the centre.

The faintness of the burst may be more important than it seems at first glance. Either the gamma-ray burst was unusual or, as a member of the observing team, Stephen Holland (Danish Centre for Astrophysics with the HST) explains, it may belong to a previously unnoticed, fainter, but common class of bursts: 'In 1998 when this faint burst was first seen, we knew that we would almost certainly not have seen it had it occurred at the same distance as other previously observed bursts. This opened our eyes to the fact that gamma-ray bursts exist over a range of intensities. We believe that such faint bursts had just not been detected before.'

Most astronomers today believe that the 980425 gamma-ray burst and the almost simultaneous supernova event (less than 24 hours apart) did indeed arise from the same source. The probability of two such events occurring at the same place and at nearly the same time is extremely low - perhaps as little as 1 in 10,000. Two other events have indicated a link between gamma-ray bursts and supernova explosions, but the case of SN 1998bw and GRB 980425 has made a physical connection between these two most energetic events in the Universe highly probable.

The proximity of the host galaxy and the supernova's brilliant light has helped European scientists pinpoint the location of the gamma-ray burst and given them the opportunity to observe and study the environment around gamma-ray bursts. The team has used the sharpness of the Hubble Space Telescope's vision to discover that the burst and the supernova occurred in an active region in one of the galaxy's spiral arms. Here an underlying hydrogen gas complex is overlaid with several bright red giant stars. At the exact position of the gamma-ray burst a very compact source of emission is seen. Most of this emission is probably the last remnant of the fading light from the supernova itself, but the scientists suspect that a faint underlying star cluster may contribute as well.

SN 1998bw was a special type of supernova - type Ic. Theories predict that the progenitor stars for this type of supernova are very heavy - in this case about 40 solar masses. These stars only live for a few million years, which give them no time to leave the area of active star formation where they were born. Theorists have proposed an interesting model that can explain the event. Massive stars that lose their hydrogen and helium envelopes then explode very violently as hypernovae and emit large quantities of gamma-rays in the process.

Johan Fynbo from the University of Copenhagen explains: 'This barred spiral is typical of its type in that it clearly supports a lot of star forming activity. The presence of a bar stirs up the gas in the whole disc of the galaxy and thereby promotes star formation. This process was first suggested by the Swedish astronomer Bertil Lindblad in the forties.' Jens Hjorth from the University of Copenhagen continues: 'In our opinion we now have solid evidence that at least some gamma-ray bursts originate in star forming regions. This has very interesting cosmological implications. Gamma-ray bursts are so powerful that they may serve as direct indicators of star formation taking place at the other end of the Universe.'

Although this discovery gives us crucial details about the surroundings of a gamma-ray burst for the first time, the rare combination of a very faint burst with the simultaneous occurrence of an extremely bright and unusual type of supernova still needs to be clarified. Meanwhile the group continues its investigation of the stars in this region of the nearby spiral galaxy to reveal their age, colour and other important properties. 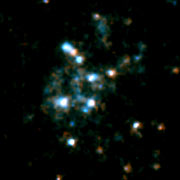