Combining Hubble Space Telescope images with radio observations has revealed a highly unusual system consisting of a fast spinning pulsar and a bloated red companion star. The existence of the system is something of a mystery - the best explanation so far is that we have our first view of a millisecond pulsar just after it has been 'spun up' by its red companion star.

Although more than 90 specimens of the exotic species of fast-spinning 'millisecond pulsars' are known today, no observations have yet been made to back up the theory of how they reached this state. A series of observations of the millisecond pulsar PSR J1740-5340 (spinning at 274 times per second) and its companion star from the ESA/NASA Hubble Space Telescope and the Parkes radio telescope seem to show the final stage of the pulsar acceleration process for the first time.

The generally favoured 'recycling scenario' describing the creation of millisecond pulsars proposes that an old, slowly rotating neutron star begins to absorb matter from its elderly companion star, typically a red giant. The matter hits the surface of the neutron star and transfers energy to make it rotate faster. The process ends when the pulsar has been revitalised and is rotating at hundreds of times per second (hence a millisecond pulsar), and its companion almost emptied of matter and turned into a white dwarf.

A team of scientists from Bologna Astronomical Observatory conducted a series of Hubble observations of the pulsar-companion system in the globular cluster NGC 6397. The observations show that the millisecond pulsar's companion is not the expected white dwarf, but a bloated red star, whose radius is about 100 times greater than that of a white dwarf and at least five times greater than a normal star of similar mass! This unique couple orbit around each other in 1.35 days.

The observations also indicate the abnormal presence of large amounts of gas in the system. This gas is released from the bloated companion star and soon will be swept away by the recently accelerated pulsar. Once the pulsar has been spun up it can no longer absorb gas from the companion.

Lead astronomer Francesco Ferraro explains: 'We have certainly discovered a very unusual pair. A system consisting of a millisecond pulsar and a star that is not a white dwarf has never been seen before. Our favoured theory is that we are seeing the system before the bloated red star has been `emptied' of gas and turned into a white dwarf. If this compelling hypothesis is wrong then the companion star could be a normal star in the globular cluster that has been captured by the pulsar by chance. Maybe it has expelled the white dwarf that we normally find in such systems.'

Members of the team of scientists include: Francesco Ferraro, Andrea Possenti, Nichi D'Amico and Elena Sabbi (all from Bologna Observatory, Italy).

The results are published in two papers in the November 1, 2001 issue of Astrophysical Journal Letters. 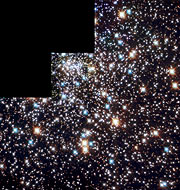