The remarkable Red Rectangle: A stairway to heaven?

Astronomers may not have observed the fabled "Stairway to Heaven", but they have photographed something almost as intriguing: ladder-like structures surrounding a dying star.

This image, taken with the NASA/ESA Hubble Space Telescope, reveals startling new details of one of the most unusual nebulae known in our Galaxy. Catalogued as HD 44179, this nebula is more commonly called the "Red Rectangle" because of its unique shape and colour as seen with ground-based telescopes.

Hubble has revealed a wealth of new features in the Red Rectangle that cannot be seen by ground-based telescopes looking through the Earth's turbulent atmosphere. Details of the Hubble study were published in the April 2004 issue of The Astronomical Journal.

Hans Van Winckel, Catholic University of Leuven, Belgium, the principal investigator for the Hubble observations, says: "The structure of the Red Rectangle revealed by Hubble is surprisingly complex. The features that impress me most look like the rungs of a ladder, although they are actually projections of gas cones, like a series of nested wine glasses filled to their brim with gas and seen from the side."

Hubble's sharp pictures show that the Red Rectangle is not really rectangular, but has an X-shaped structure, that astronomers interpret as arising from outflows of gas and dust from the star in the centre. The cone-like outflows are ejected from the star in two opposing directions. In addition there are straight linking features that look like the rungs on a ladder, making the Red Rectangle look similar to a spider's web, a shape unlike that of any other known nebula in the sky. These rungs may have arisen in episodes of mass ejection from the star that occur every few hundred years and could represent a series of 'smoke rings', seen almost exactly edge-on from our vantage point.

The star at the centre of the Red Rectangle began its life as a star similar to our Sun. It is now nearing the end of its lifetime, and is in the process of ejecting its outer layers to produce the visible nebula. The shedding of the outer layers began about 14 000 years ago, and in a few thousand years, the star will have become smaller and hotter, releasing a flood of ultraviolet light into the surrounding nebula. When this occurs the gas in the nebula will begin to fluoresce, producing a "planetary nebula".

At the present time, however, the star is still so cool that atoms in the nebula do not glow and the surrounding dust particles are only visible as they reflect light from the central star. Exactly which molecules in the dust cloud are responsible for the striking red colour of the Rectangle is not yet clear, but it is likely that they are some kind of hydrocarbon formed in the cool outflows from the central star.

Another remarkable feature of the Red Rectangle, visible only with the superb resolution of the Hubble telescope, is the dark band passing across the central star. This is the shadow of a dense disc of dust that surrounds the star and obscures it from direct view. The light we see streams out along the axis of the disc, and is scattered towards us by dust particles. Astronomers have found that the central star is actually a close pair of stars orbiting each other with a period of about 10 1/2 months. Interactions between these stars have probably caused the ejection of the thick dust disc that obscures our view of the binary. The disc then funnels subsequent dust and gas outflows out along its axis, forming the bizarre bi-conical structure we see as the rung of the Red Rectangle. The reasons for these fresh periodic ejections of more gas and dust remain unknown.

The Red Rectangle was first discovered during a rocket flight in the early 1970s, in which astronomers were searching for strong sources of infrared radiation. This infrared source lies about 2 300 light-years from Earth in the direction of the constellation Monoceros. Stars surrounded by clouds of dust are often strong infrared sources because the dust is heated by the starlight and then re-radiates long-wavelength red light. Studies of HD 44179 with ground-based telescopes revealed a rectangular shape in the dust surrounding the star at the centre, leading to the name "Red Rectangle", coined in 1973 by astronomers Martin Cohen and Mike Merrill.

This image was made from observations taken on 17 March 1999 with Hubble's Wide Field Planetary Camera 2. 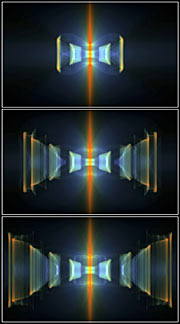 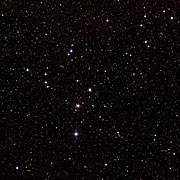 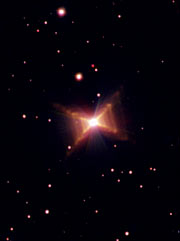