Hubble astronomers have uncovered, for the first time, a population of infant stars in the Milky Way satellite galaxy, the Small Magellanic Cloud (SMC, visible to the naked eye in the southern constellation Tucana), located 210,000 light-years away.

The exquisite sharpness of the NASA/ESA Hubble Space Telescope has plucked out an underlying population of infant stars embedded in the nebula NGC 346 that are still forming from gravitationally collapsing gas clouds. They have not yet ignited their hydrogen fuel to sustain nuclear fusion. The smallest of these infant stars is only half the mass of our Sun.

Although star birth is common within the disk of our galaxy, this smaller companion galaxy is more primeval in that it lacks a large percentage of the heavier elements that are forged in successive generations of stars through nuclear fusion.

Dwarf galaxies like the SMC are considered primitive building blocks of larger galaxies. Most of these types of galaxies existed far away, when the universe was much younger. The SMC offers a unique nearby laboratory for understanding how stars arose in the early universe. Nestled among other starburst regions with the small galaxy, the nebula NGC 346 alone contains more than 2,500 infant stars.

The Hubble images, taken with the Advanced Camera for Surveys, identify three stellar populations in the SMC region of NGC 346 - a total of 70,000 stars. The oldest population is 4.5 billion years, roughly the age of our Sun. The younger population arose only 5 million years ago (about the time Earth's first hominids began to walk on two feet). Curiously, these infant stars are strung along two intersecting dust lanes in the nebula, resembling a "T" pattern in the Hubble plot. The stars behind these lanes are coloured reddish-brown due to the effect of reddening caused by the dust.

The observations, by Antonella Nota of the European Space Agency (ESA) and the Space Telescope Science Institute (STScI), Baltimore, USA, are being presented today at the meeting of the American Astronomical Society in San Diego, California, USA.

The image was composed from two individual exposures taken through a V filter (555 nm, shown in blue) and a near-infrared filter (814 nm, shown in red). 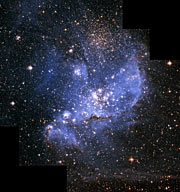