The Hubble Space Telescope's latest image of the star V838 Monocerotis (V838 Mon) reveals dramatic changes in the illumination of surrounding dusty cloud structures. The effect, called a light echo, has been unveiling never-before-seen dust patterns ever since the star suddenly brightened for several weeks in early 2002.

The illumination of interstellar dust comes from the red supergiant star at the middle of the image, which gave off a pulse of light three years ago, somewhat similar to setting off a flashbulb in a darkened room. The dust surrounding V838 Mon may have been ejected from the star during a previous explosion, similar to the 2002 event.

The echoing of light through space is similar to the echoing of sound through air. As light from the stellar explosion continues to propagate outwards, different parts of the surrounding dust are illuminated, just as a sound echo bounces off of objects near the source, and later, objects further from the source. Eventually, when light from the back side of the nebula begins to arrive, the light echo will give the illusion of contracting, and finally it will disappear.

V838 Mon is located about 20,000 light-years away from Earth in the direction of the constellation Monoceros, placing the star at the outer edge of our Milky Way galaxy. The Hubble telescope has imaged V838 Mon and its light echo several times since the star's outburst. Each time Hubble observes the event, different thin sections of the dust are seen as the pulse of illumination continues to expand away from the star at the speed of light, producing a constantly changing appearance. During the outburst event whose light reached Earth in 2002, the normally faint star suddenly brightened, becoming 600,000 times more luminous than our Sun.

The new image of V838 Mon, taken in October 2004 with Hubble's Advanced Camera for Surveys, was prepared from images obtained through filters that isolate blue, green, and infrared light. These images have been combined to produce a full-colour picture that approximates the true colours of the light echo and the very red star near the centre. 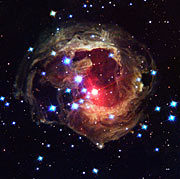 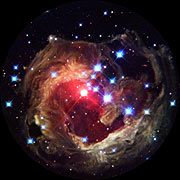