With the release of version 2 of the popular ESA/ESO/NASA Photoshop FITS Liberator image processing software it is now easier and faster than ever before to create colour images from raw observations from for instance the NASA/ESA Hubble Space Telescope, ESA's XMM-Newton and the NASA Spitzer Space Telescope.

In July 2004 imaging scientists at the European Space Agency, the European Southern Observatory and NASA released a free plug-in called the ESA/ESO/NASA Photoshop FITS Liberator. FITS stands for Flexible Image Transport System and this single file format archives nearly all images of stars, nebulae and galaxies produced by major telescopes around the world. Until July 2004, this file format was only accessible to very few people other than the scientists themselves using highly specialized image processing tools.

With the release of version 2 of the FITS Liberator today it has become even easier to create colour images from raw observations. You can literally create spectacular pictures like the iconic Hubble image 'Pillars of Creation' in a matter of minutes.

Since the release of v.1 in July 2004, more than 50,000 laypeople, educators and amateur astronomers have started using the Liberator. The FITS Liberator has also become industry standard for the professional imaging scientists at the European Space Agency, the European Southern Observatory and NASA.

Version 2 of the FITS Liberator has been improved in several areas, including:

Apart from the great advantages of an interactive workflow, the Liberator enables creation of images with improved quality as the many greyscales in the original observations are preserved. This gives added detail in the shadows and an increased gamut (colour space) in the finished colour images.

The ESA/ESO/NASA Photoshop FITS Liberator v.2 will be released today and is freely available for download from:

Some of the most enthusiastic members of the FITS Liberator community, such as amateur astronomer Davide De Martin, have created a huge online digital library of their own best Liberator images. They compete with each other to create the most stunning astronomical imagery. These images can be found via the link above.

FITS is an abbreviation for Flexible Image Transport System and has been a standard since 1982 and is recognized by the International Astronomical Union.

The team that produced the ESA/ESO/NASA Photoshop FITS Liberator consists of: 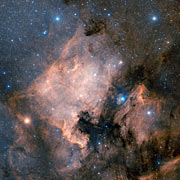 PR Image heic0510b
Make your own Pillars of Creation