Black hole in search of a home

The detection of a super massive black hole without a massive host galaxy is the surprising result from a large Hubble and VLT study of quasars. This is the first convincing discovery of such an object. One intriguing explanation is that the host galaxy may be made almost exclusively of dark matter.

A team of European astronomers has used two of the most powerful astronomical facilities available, the NASA/ESA Hubble Space Telescope and the ESO Very Large Telescope (VLT) at Cerro Paranal, to confidently claim the discovery of a bright quasar without a massive host galaxy. Quasars are powerful and typically very distant source of prodigious amounts of radiation. They are commonly associated with galaxies containing an active central black hole.

The team conducted a detailed study of 20 relatively nearby quasars. For 19 of them, they found, as expected, that these super massive black holes are surrounded by a host galaxy. But when they studied the bright quasar HE0450-2958, located some 5 billion light-years away, they could not find evidence for a host galaxy. This, the astronomers suggest, may indicate a rare case of a collision between a seemingly normal spiral galaxy and an exotic object harbouring a very massive black hole.

With masses up to hundreds of millions that of the Sun, super massive black holes are commonly found in the centres of the most massive galaxies, including our own Milky Way. These black holes sometimes dramatically manifest themselves by devouring matter that they gravitationally swallow from their surroundings. The best fed of these shine as quasars (the name quasar is a contraction of quasi-stellar object, as they had initially been confused with stars).

The past decade of observations, largely with the Hubble telescope, has shown that quasars are normally associated with massive host galaxies. However, observing the host galaxy of a quasar is challenging work because the quasar completely outshines the host and masks the galaxy's underlying structure.

To overcome this problem, the astronomers devised a new and highly efficient strategy. Combining Hubble's ultra sharp images and spectroscopy from ESO's VLT they observed their sample of 20 quasars at the same time as a reference star. The star served as a reference pinpoint light source that was used to disentangle the quasar light from any possible light from an underlying galaxy.

"With the powerful combination of Hubble and the VLT we are confident that we would have been able to detect a normal host galaxy", says Pierre Magain (Université de Liège, Belgium), member of the team of astronomers who conducted the study. "We must therefore conclude that, contrary to our expectations, this bright quasar is not surrounded by a massive galaxy".

The astronomers did however detect an interesting smaller cloud of gas about 2,500 light-years wide, which they call "the blob", just next to the quasar. VLT observations show this cloud to be glowing because it is bathed in the intense radiation coming from the quasar, and not from stars inside the cloud. Most likely, it is the gas from this cloud that feeds the super massive black hole, thereby allowing it to become a quasar.

In the Hubble image, a strongly disturbed galaxy, showing all the signs of a recent collision, is seen near the quasar. The VLT observations show it to be forming stars at a frantic rate. "The absence of a massive host galaxy, combined with the existence of the blob and the star-forming galaxy, lead us to believe that we have uncovered a really exotic quasar", says team member Frédéric Courbin (Ecole Polytechnique Federale de Lausanne, Switzerland). "There is little doubt that an increase in the formation of stars in the companion galaxy and the quasar itself have been ignited by a collision that must have taken place about 100 million years ago. What happened to the putative quasar host remains unknown."

HE0450-2958 constitutes a challenging case. The astronomers propose several possible explanations. Has the host galaxy been completely disrupted as a result of the collision? It is hard to imagine how that could happen. Has an isolated black hole captured gas while crossing the disk of a spiral galaxy? This would require very special conditions and would probably not have caused such a tremendous disturbance of the neighbouring galaxy as is observed. Further studies will hopefully clarify the situation.

Another intriguing hypothesis is that the galaxy harbouring the black hole was almost exclusively made of dark matter. It may be that what is observed is a normal phase in the formation of a massive galaxy, which in this case has taken place several billion years later than in most others. 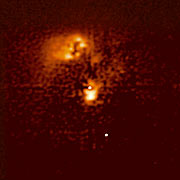