Astronomers using the NASA/ESA Hubble Space Telescope have identified the source of a mysterious blue light surrounding a supermassive black hole in our neighbouring Andromeda Galaxy (M31). Though the light has puzzled astronomers for more than a decade, the new discovery makes the story even more mysterious.

The blue light is coming from a disk of hot, young stars. These stars are whipping around the black hole in much the same way as planets in our solar system are revolving around the Sun. Astronomers are perplexed about how the pancake-shaped disk of stars could form so close to a giant black hole. In such a hostile environment, the black hole's tidal forces should tear matter apart, making it difficult for gas and dust to collapse and form stars. The observations, astronomers say, may provide clues to the activities in the cores of more distant galaxies.

By finding the disk of stars, astronomers also have collected what they say is ironclad evidence for the existence of the monster black hole. The evidence has helped astronomers rule out all alternative theories for the dark mass in the Andromeda Galaxy's core, which scientists have long suspected was a black hole.

"Seeing these stars is like watching a magician pulling a rabbit out of a hat. You know it happened but you don't know how it happened," said Tod Lauer of the National Optical Astronomy Observatory in Tucson, Arizona. He and a team of astronomers, led by Ralf Bender of the Max Planck Institute for Extraterrestrial Physics in Garching, Germany, and John Kormendy of the University of Texas in Austin, made the Hubble observations. The team's results will be published in the Sept. 20, 2005 issue of the Astrophysical Journal.

Hubble Probes Strange Blue Light
Astronomer Ivan King of the University of Washington and colleagues first spotted the strange blue light in 1995 with the Hubble Space Telescope. He thought the light might have come from a single, bright blue star or perhaps from a more exotic energetic process. Three years later, Lauer and Sandra Faber of the University of California at Santa Cruz used Hubble again to study the blue light. Their observations indicated that the blue light was a cluster of blue stars.

Now, new spectroscopic observations by Hubble's Space Telescope Imaging Spectrograph (STIS) reveal that the blue light consists of more than 400 stars that formed in a burst of activity about 200 million years ago. The stars are tightly packed in a disk that is only a light-year across. The disk is nested inside an elliptical ring of older, cooler, redder stars, which was seen in previous Hubble and ground-based observations.

The astronomers also used STIS to measure the velocities of those stars. They obtained the stars' speeds by calculating how much their light waves are stretched and compressed as they travel around the black hole. Under the black hole's gravitational grip, the stars are travelling very fast: 3.6 million kilometres an hour (1,000 kilometres a second). They are moving so fast that it would take them 40 seconds to circle the Earth and six minutes to arrive at the Moon. The fastest stars complete an orbit in 100 years. Andromeda's active core probably made similar disks of stars in the past and may continue to make them.

"The blue stars in the disk are so short-lived that it is unlikely in the long 12-billion-year history of Andromeda that such a short-lived disk would appear now," Lauer said. "That's why we think that the mechanism that formed this disk of stars probably formed other stellar disks in the past and will trigger them again in the future. We still don't know, however, how such a disk could form in the first place. It still remains an enigma."

The astronomers credit Hubble's superb vision for finding the disk. "Only Hubble has the resolution in blue light to observe this disk," said team member Richard Green of the National Optical Astronomy Observatory in Tucson. "It is so small and so distinct from the surrounding red stars that we were able to use it to probe into the very dynamical heart of Andromeda. These observations were taken by the members of our team that built STIS. We designed its visible channel specifically to seize such an opportunity - to measure starlight closer to a black hole than in any other galaxy outside our own."

Solid Evidence for a Monster Black Hole
In addition to the discovery of the disk of stars, the astronomers used this uniquely close look at Andromeda to prove unambiguously that the galaxy hosts a central black hole. In 1988, in independent ground-based studies, John Kormendy and the team of Alan Dressler and Douglas Richstone discovered a central dark object in Andromeda that they believed was a supermassive black hole. This was the first strong case for what are now 40 detections of black holes, most of them made by Hubble. Those observations, however, did not definitively rule out other, very exotic, and far less likely, alternatives.

The STIS observations of Andromeda are so precise that astronomers have eliminated all other possibilities for what the central, dark object could be. They also calculated that the black hole's mass is 140 million Suns, which is three times more massive than once thought.

So far, dark clusters have definitively been ruled out in only two galaxies, NGC 4258 and our galaxy, the Milky Way. "These two galaxies give us unambiguous proof that black holes exist," Kormendy added. "But both are special cases - NGC 4258 contains a disk of water masers that we observe with radio telescopes, and our Galactic Centre is so close that we can follow individual stellar orbits. Andromeda is the first galaxy in which we can exclude all exotic alternatives to a black hole using Hubble and using the same techniques by which we find almost all supermassive black holes."

"Studying black holes always was a primary mission of Hubble," ormendy said. "Nailing the black hole in Andromeda is without a doubt an important part of its legacy. It makes us much more confident that the other central dark objects detected in galaxies are black holes, too."

"Now that we have proven that the black hole is at the centre of the disk of blue stars, the formation of these stars becomes hard to understand," Bender added. "Gas that might form stars must spin around the black hole so quickly - and so much more quickly near the black hole than farther out - that star formation looks almost impossible. But the stars are there."

A Galaxy's Active Core
The black hole and the disk of stars are not the only pieces of architecture in Andromeda's core. A team led by Lauer and Faber used Hubble in 1993 to discover that the galaxy appears to have a double cluster of stars at its centre. This finding was a surprise, because two clusters should merge into one in only a few hundred thousand years. Scott Tremaine of Princeton University solved this problem by suggesting that the "double nucleus" was actually a ring of old, red stars. The ring looked like two star clusters because astronomers were only seeing the stars on the opposite ends of the ring. The ring is about five light-years from the black hole and its surrounding disk of blue stars. The disk and the ring are tilted at the same angle as viewed from Earth, suggesting that they may be related.

Although astronomers are surprised to find a blue disk of stars swirling around a supermassive black hole, they also say the puzzling architecture may not be that unusual.

"The dynamics within the core of this neighbouring galaxy may be more common than we think," Lauer explained. "Our own Milky Way apparently has even younger stars close to its own black hole. It seems unlikely that only the closest two big galaxies should have this odd activity. So this behaviour may not be the exception but the rule. And we have found other galaxies that have a double nucleus." 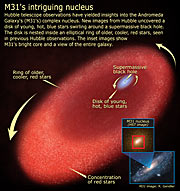 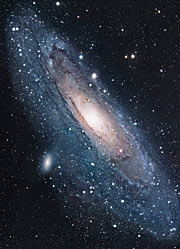 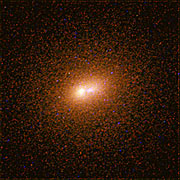 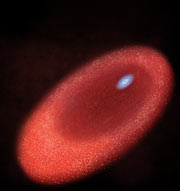 PR Image heic0512f
Artist's rendition of the core of M31