The latest photo from the Hubble Space Telescope, presented at the 2006 General Assembly of the International Astronomical Union in Prague this week, shows a star forming region in the Large Magellanic Cloud (LMC). This sharp image reveals a large number of low-mass infant stars coexisting with young massive stars.

This is a Hubble Space Telescope image of one of the hundreds of star-forming stellar systems, called stellar associations, located 180,000 light-years away in the Large Magellanic Cloud (LMC). The LMC is the second closest known satellite galaxy of our Milky Way, orbiting it roughly every 1.5 billion years. Earlier ground-based observations of such systems had only allowed astronomers to study the bright blue giant stars in these systems, and not the low-mass stars.

This new, most detailed view to date of the star-forming association LH 95 was taken with Hubble's Advanced Camera for Surveys and provides a extraordinarily rich sample of newly formed low-mass stars, allowing a more accurate calculation of their ages and masses. An international team of astronomers, led by Dimitrios Gouliermis of the Max-Planck Institute for Astronomy (MPIA) in Heidelberg, is currently studying the Hubble data. According to Dr. Gouliermis "Hubble's sharp vision has over the years dramatically changed the picture that we had for stellar associations in the Magellanic Clouds". The LMC is a galaxy with relatively small amounts of elements heavier than hydrogen, giving astronomers an insight into star-formation in environments different from our Milky Way.

Once massive stars - those with at least 3 times the mass of the Sun - have formed, they generate strong stellar winds and high levels of ultraviolet radiation that ionize the surrounding interstellar gas. The result is a nebula of glowing hydrogen that will expand out into the molecular cloud that originally collapsed to form these stars. The blue haze seen throughout the image around LH 95 is actually part of this bright nebula, known as DEM L 252.

Some dense parts of this star-forming region have not been completely eroded by the stellar winds and can still be seen as dark dusty filaments in the picture. Such dust lanes absorb parts of the blue light from the stars behind them, making them appear redder. Other parts of the molecular cloud have already contracted to turn into glowing groups of infant stars, the fainter of which have a high tendency to cluster. The new Hubble view of LH 95 shows that there are at least two small compact clusters associated with such groups, one to the right, above the centre of the picture and one to the far left. These stellar nurseries host hundreds of newly discovered infant low-mass stars. Such stars have also been found by Hubble in the main part of LH 95 amongst its massive bright stellar members.

This deep image also reveals a variety of distant galaxies, seen as reddish spirals and elliptical galaxies decorating the background of LH 95.

The Large and Small Magellanic Clouds can be seen by the naked eye in the southern hemisphere. 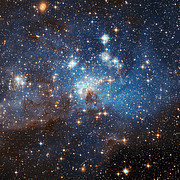 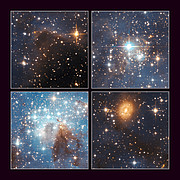 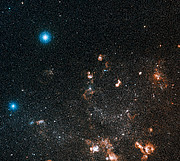