The NASA/ESA Hubble Space Telescope has photographed three magnificent sections of the Veil Nebula - the shattered remains of a supernova that exploded some 5-10,000 years ago. The new Hubble images provide beautiful views of the delicate, wispy structure resulting from this cosmic explosion.

Although we don't usually think about it, the stars twinkling in the night sky don't shine forever. How long a star lives depends on how big and heavy it is. The bigger the star, the shorter its life. When a star significantly heavier than our Sun runs out of fuel, it collapses and blows itself apart in a catastrophic supernova explosion. A supernova releases so much light that it can outshine a whole galaxy of stars put together. The exploding star sweeps out a huge bubble in its surroundings, fringed with actual stellar debris along with material swept up by the blast wave. This glowing, brightly-coloured shell of gas forms a nebula that astronomers call a 'supernova remnant'. Such a remnant can remain visible long after the initial explosion fades away.

A series of three new images taken with the NASA/ESA Hubble Space Telescope reveals magnificent sections of one of the most spectacular supernova remnants in the sky - the Veil Nebula. The entire shell spans about 3 degrees, corresponding to about 6 full moons. The small regions captured in the new Hubble images provide stunning close-ups of the Veil. Fascinating smoke-like wisps of gas are all that remain visible of what was once a Milky Way star.

Scientists estimate that the supernova explosion occurred some 5-10,000 years ago and could have been witnessed and recorded by ancient civilizations. These would have seen a star increase in brightness to roughly the brightness of the crescent Moon.

The intertwined rope-like filaments of gas in the Veil Nebula result from the enormous amounts of energy released as the fast-moving debris from the explosion ploughs into its surroundings and creates shock fronts. These shocks, driven by debris moving at 600,000 kilometres per hour, heat the gas to millions of degrees. It is the subsequent cooling of this material that produces the brilliantly coloured glows.

The Hubble images of the Veil Nebula are striking examples of how processes that take place hundreds of light-years away can sometimes resemble effects we see around us in our daily life. The structures have similarities to the patterns formed by the interplay of light and shadow on the bottom of a swimming pool, rising smoke or ragged cirrus clouds.

Why are astronomers interested in studying supernovae and their remnants? Supernovae are extremely important for understanding our own Milky Way. Although only a few stars per century in our Galaxy will end their lives in this spectacular way, these explosions are responsible for making all chemical elements heavier than iron in the Universe. Many elements, such as copper, mercury, gold, iodine and lead that we see around us here on Earth today were forged in these violent events billions of years ago. The expanding shells of supernova remnants were mixed with other material in the Milky Way and became the raw material for new generations of stars and planets.

The chemical elements that constitute the Earth, the planets and animals we see around us - and as a matter of fact our very selves - were built deep inside ancient stars and in the supernova explosions that result in the nebula we are seeing here. The green in the grass and the red of our blood are indeed the colours of stardust.

The Veil Nebula is a prototypical middle-aged supernova remnant, and is an ideal laboratory for studying the physics of supernova remnants: it is fairly nearby, has a large angular size and has a relatively small amount of foreground extinction.

Also known as Cygnus Loop, the Veil Nebula is located in the constellation of Cygnus, the Swan. It is about 1,500 light-years away from Earth. One of the most remarkable parts of the remnant is the so-called Witch's Broom Nebula (seen to the right in the overview image). The bright blue star - dubbed 52 Cygni and unrelated to the supernova explosion - can be observed with the naked eye on a clear summer's night.

The Hubble Space Telescope is a project of international cooperation between the European Space Agency and NASA. 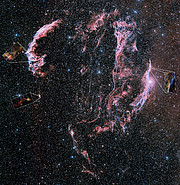 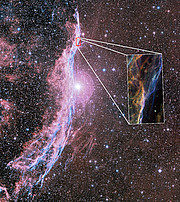 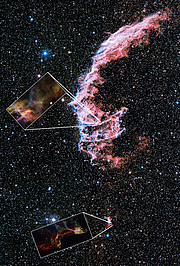 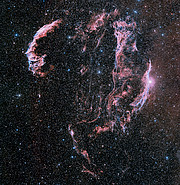 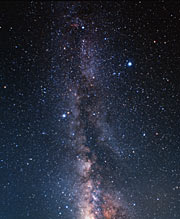 PR Video heic0712f
Zomming out from the Witch's Broom Nebula