The NASA/ESA Hubble Space Telescope has given astronomers a fascinating new insight into the atmosphere of a planet in orbit around another star. The observations provide evidence of the presence of hazes in the atmosphere of the planet HD 189733b.

A team of astronomers have used the NASA/ESA Hubble Space Telescope to detect, for the first time, strong evidence of hazes in the atmosphere of a planet orbiting a distant star. The discovery comes after extensive observations made recently with Hubble's Advanced Camera for Surveys (ACS).

The team, led by Frédéric Pont from the Geneva University Observatory in Switzerland, used Hubble's ACS to make the first detection of hazes in the atmosphere of the giant planet. "One of the long-term goals of studying extrasolar planets is to measure the atmosphere of an Earth-like planet, this present result is a step in this direction" says Pont. "HD 189733b is the first extrasolar planet for which we are piecing together a complete idea of what it really looks like."

The planet itself, orbiting close to its parent star, is a "hot-Jupiter" type of gas giant slightly larger than Jupiter. The proximity to its star results in an atmospheric temperature of roughly seven hundred degrees Celsius. Measurements of the way light varies as the planet passes in front of its parent star indicates that HD 189733b has neither Earth-sized moons nor any discernable Saturn-like ring system.

Hubble's ACS camera, coupled with a grism (a kind of cross between a prism and a diffraction grating) allowed the astronomers to make extremely accurate measurements of the spectrum of HD 189733b, allowing conclusions to be drawn about the composition of the planet's atmosphere. The exquisite level of precision needed to make this observation can only, at the moment, be achieved from space. The combination of a large planet and relatively small parent star - only 76% of the diameter of our Sun - contributes to the success of this delicate experiment.

Where the scientists had expected to see the fingerprints of sodium, potassium and water there were none. This finding, combined with the distinct shape of the planet's spectrum, infers that high level hazes (with an altitude range of roughly 1000 km) are present. So the atmosphere on HD 189733b would look very similar to a gorgeous red sunset over Athens! Venus and Saturn's moon Titan, in our own Solar System, are also covered with haze. According to the scientists the haze probably consists of tiny particles (less than 1/1000 mm in size) of condensates of iron, silicates and aluminium oxide dust (the compound on Earth which the mineral sapphire is made of).

As part of the observations of HD 189733, the teams of astronomers also needed to accurately account for the variations in the star's brightness during the set of observations. "Starspots" like those seen on our own Sun may cover several percent of the star and are thought to be about 1000 degrees Celsius cooler than the rest of HD 189733's surface. It was found that there is a starspot on the star's surface which is over 80,000 km across. 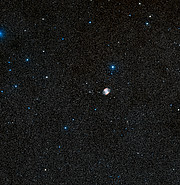 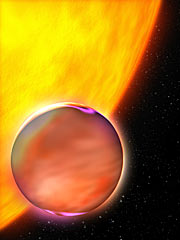