When it comes to galaxies, diversity is everywhere

A group of galaxies in our cosmic backyard has given astronomers clues about how stars form. A thorough survey using the NASA/ESA Hubble Space Telescope has observed around 14 million stars in 69 galaxies. Some galaxies were found to be full of ancient stars, while others are like sun-making factories.

A typical galaxy contains billions of stars but looks smooth when viewed through a conventional telescope because the stars appear blurred together. In contrast, the galaxies observed in this new survey are close enough to Earth that the sharp view provided by Hubble's Advanced Camera for Surveys and Wide Field Planetary Camera 2 can resolve the brightness and colour of some individual stars. This allows scientists to determine the history of star formation within a galaxy and tease out subtle features in a galaxy's shape.

"Past Hubble observations of the local neighbourhood have provided dramatic insights into the star-formation histories of individual galaxies, but the number of galaxies studied in detail has been rather small", said Julianne Dalcanton of the University of Washington in Seattle (USA) and leader of the ANGST survey. "Instead of picking and choosing particular galaxies to study, our survey will be complete by virtue of looking at 'all' the galaxies in the region. This gives us a multi-colour picture of when and where all the stars in the local Universe formed."

Many stars in nearby galaxies are the fossil equivalents of new stars forming in the far Universe. "When we look back in time at distant, young galaxies, we see lots of vigorous star formation. However, we can only guess as to what those galaxies might eventually turn into", Dalcanton explained. "Using the galaxies in the nearby Universe as a 'fossil record', we can compare them with young galaxies far away. This comparison gives us a history of star formation and provides a better understanding of the masses, structures, and environments of the galaxies."

Early results of the ANGST survey show the rich diversity of galaxies. Some are made up entirely of ancient stars, while others have been forming stars nearly continuously during their whole lives. There are even a few examples of galaxies that have only started forming stars in the recent past. "With these images, we can see what makes each galaxy unique", said team member Benjamin Williams of the University of Washington.

In a separate paper describing the star-formation history in M81, astronomers confirmed that massive spiral galaxies formed most of their stars in the early Universe. Analysing M81's outer disk, the astronomers found that most of the stars formed more than 7 billion years ago, when the Universe was half its present age. M81 and other mammoth galaxies also experienced rapid enrichment of chemical elements heavier than the hydrogen and helium produced during the Big Bang, such as carbon, through the deaths of massive stars in supernova explosions. "We were surprised by how quickly the elements formed and how the subsequent star-formation rate for the bulk of the stars in M81 changed after that", said Williams, the paper's lead author.

"This rich survey will add to Hubble's legacy, providing a foundation for future studies", Dalcanton added. "With this information, we will be able to trace the complete cycle of star formation in detail." 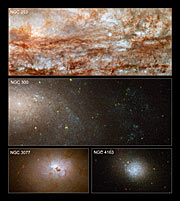