A recent NASA/ESA Hubble Space Telescope image of part of NGC 7023, or the Iris Nebula, highlights a perfect dust laboratory in the sky.

On Earth, we tend to find dust nothing more than a nuisance that blankets our furniture and causes us to sneeze. Cosmic dust can also be a hindrance to astronomers because cameras using visible light cannot see through it. However, studying cosmic dust in detail helps astronomers to pin down the ingredients of the raw mixture that eventually gives birth to stars.

This close-up of an area in the northwest region of the large Iris Nebula seems to be clogged with cosmic dust. With bright light from the nearby star HD 200775 [1] illuminating it from above, the dust resembles thick mounds of billowing cotton. It is actually made up of tiny particles of solid matter, with sizes from ten to a hundred times smaller than those of the dust grains we find at home [2]. Both background and foreground stars are dotted throughout the image.

NGC 7023 is a reflection nebula, which means it scatters light from a massive nearby star, in this case, HD 200775. Reflection nebulae are different from emission nebulae, which are clouds of gas that are hot enough to emit light themselves. Reflection nebulae tend to appear blue because of the way light scatters, but parts of the Iris Nebula appear unusually red.

Researchers studying the object are particularly interested in the region to the left and slightly above centre in the image, where they find dusty filaments to be redder than expected. An unknown chemical compound, most likely based on hydrocarbons, is responsible for the red tinge. The high resolution and sensitivity of Hubble’s instruments allow astronomers to study the area in detail. Images and spectra are only part of the analysis. On Earth, scientists are performing additional laboratory tests to assess better the exact chemical composition of the nebula.

NGC 7023 was discovered by Sir William Herschel in 1794; the nebula is in the constellation of Cepheus, the King, in the northern sky. NGC 7023 is approximately 1400 light–years from Earth and about six light-years across. This aethereal image was taken by Hubble's Advanced Camera for Surveys. Astronomers also used Hubble’s Near Infrared Camera and Multi-Object Spectrometer (NICMOS) instrument to try to determine which chemical elements are present in the nebula.

North is down, East is right. The field of view is 3.3 arcminutes. The image is a composite of four images obtained through blue, green, near-infrared and H-alpha filters.

[2] The typical sizes of cosmic dust grains range between a few hundredths of a micron and several microns.

These observations were obtained by a team led by Karl Gordon from the Space Telescope Science Institute in Baltimore, Maryland, USA. 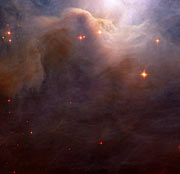 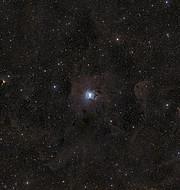