The new Wide Field Camera 3 aboard the NASA/ESA Hubble Space Telescope has taken the deepest image yet of the Universe in near-infrared light. The faintest and reddest objects in the image are likely the oldest galaxies ever identified, having formed between only 600–900 million years after the Big Bang.

In 2004, Hubble created the Hubble Ultra Deep Field (HUDF), the deepest visible-light image of the Universe, and now, with its brand-new camera, Hubble is seeing even farther. This image was taken in the same region as the visible HUDF, but is taken at longer wavelengths. Hubble’s newly installed Wide Field Camera 3 (WFC3) collects light from near-infrared wavelengths and therefore looks even farther back towards the Big Bang, because the light from hot young stars in these very distant galaxies is stretched out of the ultraviolet and visible regions of the spectrum into near-infrared wavelengths by the expansion of the Universe. This new deep view also provides insights into how galaxies grew in their formative years early in the Universe's history.

A boon to astronomers worldwide, the new WFC3 data — taken by the HUDF09 team — have set a multitude of teams to work, furiously searching for the most distant galaxies yet discovered. In just three months, twelve scientific papers on these new data have been submitted.

This image was taken by the HUDF09 team [1], which has made it available for research by astronomers worldwide. The photo was taken with the new WFC3/infrared camera on Hubble in late August 2009, during a total of four days of pointing for 173 000 seconds of total exposure time. Infrared light is invisible to the human eye and therefore does not have colours that can be perceived. The representation is "natural" in that shorter infrared wavelengths are represented as blue and the longer wavelengths as red. The faintest objects are about one billion times fainter than the dimmest visible objects seen with the naked eye.

These Hubble observations are blazing a trail for Hubble’s successor, the NASA/ESA James Webb Space Telescope (JWST), which will look even farther into the Universe than Hubble, at infrared wavelengths. The launch of JWST is planned for 2014. 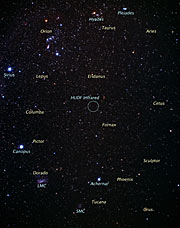 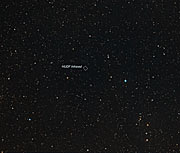