Using the NASA/ESA Hubble Space Telescope, astronomers have uncovered two distinct kinds of "rejuvenated" stars in the globular cluster Messier 30. A new study shows that both stellar collisions and a process sometimes called vampirism are behind this cosmic "face lift". The scientists also uncover evidence that both sorts of blue stragglers were produced during a critical dynamical event (known as "core collapse") that occurred in Messier 30 a few billion years ago.

Stars in globular clusters [1] are generally extremely old, with ages of 12-13 billion years. However, a small fraction of them appear to be significantly younger than the average population and, because they seem to have been left behind by the stars that followed the normal path of stellar evolution and became red giants, have been dubbed blue stragglers [2]. Blue stragglers appear to regress from "old age" back to a hotter and brighter "youth", gaining a new lease on life in the process. A team of astronomers used Hubble to study the blue straggler star content in Messier 30, which formed 13 billion years ago and was discovered in 1764 by Charles Messier. Located about 28 000 light-years away from Earth, this globular cluster — a swarm of several hundred thousand stars — is about 90 light-years across.

Although blue stragglers have been known since the early 1950s, their formation process is still an unsolved puzzle in astrophysics. "It’s like seeing a few kids in the group picture of a rest-home for retired people. It is natural to wonder why they are there," says Francesco Ferraro from the University of Bologna in Italy, lead author of the study that will be published this week in Nature [3]. Researchers have been studying these stars for many years and knew that blue stragglers are indeed old. They were thought to have arisen in a tight binary system [4]. In such a pair, the less massive star acts as a "vampire", siphoning fresh hydrogen from its more massive companion star. The new fuel supply allows the smaller star to heat up, growing bluer and hotter — behaving like a star at an earlier stage in its evolution.

The new study shows that some of the blue stragglers have instead been rejuvenated by a sort of "cosmic facelift", courtesy of cosmic collisions. These stellar encounters are nearly head-on collisions in which the stars might actually merge, mixing their nuclear fuel and re-stoking the fires of nuclear fusion. Merged stars and binary systems would both be about twice the typical mass of individual stars in the cluster.

"Our observations demonstrate that blue stragglers formed by collisions have slightly different properties from those formed by vampirism. This provides a direct demonstration that the two formation scenarios are valid and that they are both operating simultaneously in this cluster," says team member Giacomo Beccari from ESA.

Using data from the now-retired Wide Field Planetary Camera 2 (WFPC2) aboard Hubble, astronomers found that these "straggling" stars are much more concentrated towards the centre of the cluster than the average star. "This indicates that blue stragglers are more massive than the average star in this cluster," says Ferraro. "More massive stars tend to sink deep into the cluster the way a billiard ball would sink in a bucket of honey."

The central regions of high density globular clusters are crowded neighbourhoods where interactions between stars are nearly inevitable. Researchers conjecture that one or two billion years ago, Messier 30 underwent a major "core collapse" that started to throw stars towards the centre of the cluster, leading to a rapid increase in the density of stars. This event significantly increased the number of collisions among stars, and favoured the formation of one of the families of blue stragglers. On the other hand, the increase of stellar crowding due to the collapse of the core also perturbed the twin systems, encouraging the vampirism phenomenon and thus forming the other family of blue stragglers. "Almost ten percent of galactic globular clusters have experienced core collapse, but this is the first time that we see the effect of the core collapse imprinted on a stellar population," says Barbara Lanzoni, University of Bologna.

"The two distinct populations of blue stragglers discovered in Messier 30 are the relics of the collapse of the core that occurred two billion years ago. In a broad context our discovery is direct evidence of the impact of star cluster dynamics on stellar evolution. We should now try to see if other globular clusters present this double population of blue stragglers," concludes Ferraro.

[1] Globular clusters are dense agglomerations of several hundred thousand stars. Present among the earliest inhabitants of our Milky Way, they formed in the vast halo of our galaxy before it flattened to form a pancake-shaped spiral disc. Star formation essentially stopped in globular clusters 13 billion years ago, so astronomers expect to find only old stars and they use globular cluster ages as a benchmark for estimating the age of the Universe.

[3] This research was presented in a paper that appears in the 24 December 2009 issue of Nature, “Two distinct sequences of blue straggler stars in the globular cluster M30”, by F. R. Ferraro et al.

[4] In 1964 astronomers Fred Hoyle and W.H. McCrea independently suggested that blue stragglers result when two stars capture each other and form a tight binary system. 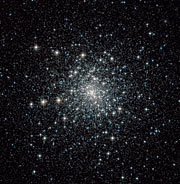 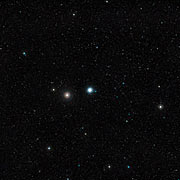