The Space Telescope European Coordinating Facility, a unique collaboration between the European Space Agency (ESA) and the European Southern Observatory, will close on 31 December 2010 after 26 years. ESA’s continuing partnership with NASA on the Hubble mission ensures that European astronomers will continue to have access to observing time.

The Space Telescope European Coordinating Facility (ST-ECF), the scientific and technical co-ordination centre for the Hubble Space Telescope in Europe, will close its doors at the end of December 2010. This is part of a process in which the European Space Agency is streamlining its operations and concentrating astronomical operations, archiving and data reduction expertise at its European Space Astronomy Centre (ESAC) in Spain.

The ST-ECF was formed in 1984, six years before Hubble’s launch, as a key plank in ESA’s partnership with NASA and as a vital element in maximising Europe’s scientific return in the pre-internet age. Rather than simply contribute to Hubble science and technology programmes in the US, ESA made the strategic decision to build capabilities in Europe. As a result, the ST-ECF was formed as a joint venture between ESA and the European Southern Observatory (ESO), combining the technical and scientific expertise of both organisations.

The ST-ECF’s primary function has been as a support facility, both by contributing to the Hubble project and providing expertise and advice to European astronomers using Hubble. But this work has also had knock-on benefits elsewhere. ESO Director General, Tim de Zeeuw explains: “Establishing the ST-ECF within ESO allowed a very productive cross-fertilisation of ideas to take place. For example, the ST-ECF’s work on software, imaging and data archives have fed back into NASA’s work on Hubble. Conversely, the experience of being involved in Hubble gave ESO invaluable expertise for our Very Large Telescope.”

One area where the ST-ECF has made a particular impact is in astronomical image processing. In the early days, techniques were developed to counteract the effects of Hubble’s flawed mirror (deconvolution). This work subsequently evolved, in collaboration with NASA’s Space Telescope Science Institute (STScI), to use a combination of multiple, slightly displaced exposures (dithering) with a combination technique (drizzling) to greatly improve the imaging capability of the telescope. This work has proved very productive for astronomy in general, not just for Hubble.

In addition, staff at the ST-ECF made important advances in the modelling of the performance of various astronomical instruments. This theoretical knowledge lets astronomers create highly sophisticated computer simulations of the instruments, allowing for precise calibration of observations and more accurate results. This modelling work has provided substantial improvements in the scientific data produced by Hubble over the years.

The ST-ECF was also a pioneer of the early internet. Communication and co-ordination with NASA in the US and sharing data with astronomers across Europe meant that effective computer networking was key. To this end, the facility pioneered online access to scientific data archives, and set up one of the very first websites in Europe in the summer of 1993.

In the last few years, the ST-ECF has developed sophisticated software to exploit a capability that enables Hubble’s cameras to be used for the simultaneous spectroscopy of many sources in the field of view. Applied from a telescope in space this slitless spectroscopy is an enormously powerful technique to study the motions and properties of objects that are so faint that they cannot be reached in any other way.

A separate and very important contribution of the ST-ECF to the ESA Science Programme over many years has been its responsibility for developing communications and outreach in Europe for Hubble.

While the ST-ECF’s closure marks the end for one aspect of Hubble activities in Europe, ESA remains a firm partner to NASA in the space telescope’s continuing mission. To this end, ESA’s Science Programme Committee recently voted unanimously to extend the ESA contribution to the end of 2014, with a further extension possible.

Martin Kessler, head of ESA’s science operations department said: “European astronomers will have access to ESA’s share of observing time for as long as Hubble remains in the sky. Additionally, we expect to preserve access to Hubble data via the European Space Astronomy Centre. As part of the ongoing collaboration with NASA, ESA will continue to deploy staff based at the Space Telescope Science Institute in Baltimore, USA.”

ESO will continue to support the ESA public outreach effort for Hubble, processing images for public release, running the ESA/Hubble website at www.spacetelescope.org and producing the popular Hubblecast podcast series. 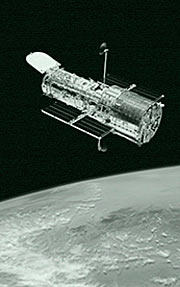