Hubble’s famous images of galaxies typically show elegant spirals or soft-edged ellipses. But these neat forms are only representative of large galaxies. Smaller galaxies like the dwarf irregular galaxy Holmberg II come in many shapes and types that are harder to classify. This galaxy’s indistinct shape is punctuated by huge glowing bubbles of gas, captured in this image from the NASA/ESA Hubble Space Telescope.

The intricate glowing shells of gas in Holmberg II were created by the energetic lifecycles of many generations of stars. High-mass stars form in dense regions of gas, and later in life expel strong stellar winds that blow away the surrounding material. At the very end of their lives, they explode in as a supernova. Shock waves rip through these less dense regions blowing out and heating the gas, forming the delicate shells we see today.

Holmberg II is a patchwork of dense star-forming regions and extensive barren areas with less material, which can stretch across thousands of light-years. As a dwarf galaxy, it has neither the spiral arms typical of galaxies like the Milky Way nor the dense nucleus of an elliptical galaxy. This makes Holmberg II, gravitationally speaking, a gentle haven where fragile structures such as these bubbles can hold their shape.

While the galaxy is unremarkable in size, Holmberg II does have some intriguing features. As well as its unusual appearance — which earned it a place in Halton Arp’s Atlas of Peculiar Galaxies, a treasure trove of weird and wonderful objects — the galaxy hosts an ultraluminous X-ray source in the middle of three gas bubbles in the top right of the image. There are competing theories as to what causes this powerful radiation — one intriguing possibility is an intermediate-mass black hole which is pulling in material from its surroundings.

This colourful image is a composite of visible and near-infrared exposures taken using the Wide Field Channel of Hubble’s Advanced Camera for Surveys. 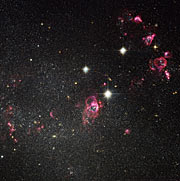 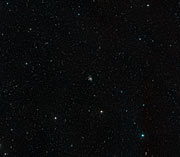