The NASA/ESA Hubble Space Telescope has produced a time-lapse movie of a mysterious protostar that behaves like a flashing light. Every 25.34 days, the object, designated LRLL 54361, unleashes a burst of light which propagates through the surrounding dust and gas. This is only the third time this phenomenon has been observed, and it is the most powerful such beacon seen to date. It is also the first to be seen associated with a light echo.

The cause of the fireworks seen in this Hubble image and video is hidden behind a dense disc and envelope of dust. However, astronomers think that the strobe effect is due to periodic interactions between two newly-formed stars that are gravitationally bound to each other.

These two stars drag material inwards from a surrounding disc of gas and dust. Astronomers propose that the light flashes seen in this video are due to this material suddenly being dumped onto the growing stars as they near one another in their orbits, unleashing a blast of radiation.

“The protostar has such large brightness variations with a precise period that it is very difficult to explain,” says James Muzerolle of the Space Telescope Science Institute in Baltimore, USA, who has recently studied this fascinating object using Hubble and NASA’s Spitzer Space Telescope. Spitzer made repeated observations over seven years, before Hubble was pointed towards the object to make detailed observations over the period of one pulse event.

The Hubble observations uncover a spectacular movement of light away from the centre of the system, an optical illusion known as a light echo. While it might look like eruptions of gas are coming out of the protostar, these pulses are actually flashes of light propagating through the surrounding dust and gas and reflecting towards the observer: there is no substantial physical motion within the cloud over these timescales.

Flashing double star systems like this one are rare, because close binaries account for only a few percent of our galaxy’s stellar population. Moreover, the pulsing light is likely to be a brief phenomenon in the early life of a star.

PR Image heic1303a
Hubble image of LRLL 54361 and its surroundings 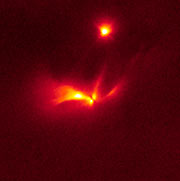