Most detailed observations ever of the Ring Nebula

The NASA/ESA Hubble Space Telescope has produced the most detailed observations ever of the Ring Nebula (Messier 57). This image reveals intricate structure only hinted at in previous observations, and has allowed scientists to construct a model of the nebula in 3D — showing the true shape of this striking object.

Formed by a star throwing off its outer layers as it runs out of fuel, the Ring Nebula is an archetypal planetary nebula [1]. It is both relatively close to Earth and fairly bright, and so was first recorded in the late 18th century. As is common with astronomical objects, its precise distance is not known, but it is thought to lie just over 2000 light-years from Earth.

From Earth’s perspective, the nebula looks roughly elliptical. However, astronomers have combined ground-based data with new observations using the NASA/ESA Hubble Space Telescope to observe the nebula again, hunting for clues about its structure, evolution, physical conditions and motion.

It turns out that the nebula is shaped like a distorted doughnut. We are gazing almost directly down one of the poles of this structure, with a brightly coloured barrel of material stretching away from us. Although the centre of this doughnut may look empty, it is actually full of lower density material that stretches both towards and away from us, creating a shape similar to a rugby ball slotted into the doughnut’s central gap.

The brightest part of this nebula is what we see as the colourful main ring. This is composed of gas thrown off by a dying star at the centre of the nebula. This star is on its way to becoming a white dwarf — a very small, dense, and hot body that is the final evolutionary stage for a star like the Sun.

The Ring Nebula is one of the most notable objects in our skies. It was discovered in 1779 by astronomer Antoine Darquier de Pellepoix, and also observed later that same month by Charles Messier, and added to the Messier Catalogue. Both astronomers stumbled upon the nebula when trying to follow the path of a comet through the constellation of Lyra, passing very close to the Ring Nebula [2].

[1] Planetary nebulae take their name from their roughly circular appearance through low-magnification telescopes. The phenomenon has nothing to do with planets.

[2] Messier 57 was not the only object to be discovered during the tracking of this comet, named C/1779 A1. Messier and other astronomers added a handful of other nebulae to the catalogue during this observing period — Messiers 56, 58, 59, 60, and 61.

The research on Messier 57 is described in a set of three papers, two published in The Astronomical Journal:

And a third paper that has been accepted for publication in The Astronomical Journal: 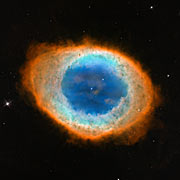 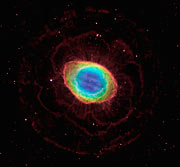 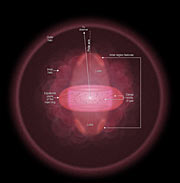 PR Video heic1310f
Zooming in on Messier 57, the Ring Nebula