Merging galaxies and droplets of starbirth

The Universe is filled with objects springing to life, evolving and dying explosive deaths. This new image from the NASA/ESA Hubble Space Telescope captures a snapshot of some of this cosmic movement. Embedded within the egg-shaped blue ring at the centre of the frame are two galaxies. These galaxies have been found to be merging into one and a "chain" of young stellar superclusters are seen winding around the galaxies’ nuclei.

At the centre of this image lie two elliptical galaxies, part of a galaxy cluster known as [HGO2008]SDSS J1531+3414, which have strayed into each other’s paths. While this region has been observed before, this new Hubble picture shows clearly for the first time that the pair are two separate objects. However, they will not be able to hold on to their separate identities much longer, as they are in the process of merging into one [1].

Finding two elliptical galaxies merging is rare, but it is even rarer to find a merger between ellipticals rich enough in gas to induce star formation. Galaxies in clusters are generally thought to have been deprived of their gaseous contents; a process that Hubble has recently seen in action. Yet, in this image, not only have two elliptical galaxies been caught merging but their newborn stellar population is also a rare breed.

The stellar infants — thought to be a result of the merger — are part of what is known as "beads on a string" star formation. This type of formation appears as a knotted rope of gaseous filaments with bright patches of new stars and the process stems from the same fundamental physics which causes rain to fall in droplets, rather than as a continuous column [2].

Nineteen compact clumps of young stars make up the length of this "string", woven together with narrow filaments of hydrogen gas. The star formation spans 100,000 light years, which is about the size of our galaxy, the Milky Way. The strand is dwarfed, however, by the ancient, giant merging galaxies that it inhabits. They are about 330,000 light years across, nearly three times larger than our own galaxy. This is typical for galaxies at the centre of massive clusters, as they tend to be the largest galaxies in the Universe.

The electric blue arcs making up the spectacular egg-like shape framing these objects are a result of the galaxy cluster’s immense gravity. The gravity warps the space around it and creates bizarre patterns using light from more distant galaxies.

Astronomers have ruled out the possibility that the blue strand is also just a lensed mirage from distant galaxies and now their challenge is to understand the origin of the cold gas that is fuelling the growth of the stellar superclusters. Was the gas already in the merging galaxies? Did it condense like rain from the rapidly cooling X-ray plasma surrounding the two galaxies? Or, did it cool out of a shock in the X-ray gas as the ten-million-degree gaseous halos surrounding the galaxies collided together? Future observations with both space- and ground-based observatories are needed to unravel this mystery.

[1] Mergers occur when two or more galaxies stray too close to one another, causing them to coalesce into one large body (heic0912). The violent process strips gas, dust and stars away from the galaxies involved and can alter their appearances dramatically, forming large gaseous tails, glowing rings, and warped galactic discs (heic0810).

[2] The merging system is forming stellar superclusters in equally spaced beads just like evenly spaced drops from a tap. The only real difference is that surface tension in the falling water is analogous to gravity in the context of the star-forming chain. This is a wonderful demonstration that the fundamental laws of physics really are scale-invariant - we see the same physics in rain drops that we do on 100 000 light-year scales. 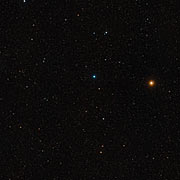