Retirement in the suburbs

Hubble traces the migration of white dwarfs in cluster 47 Tucanae

Astronomers using the NASA/ESA Hubble Space Telescope have, for the first time, collected a census of young white dwarf stars beginning their migration from the crowded centre of an ancient star cluster to its less populated outskirts. The new results challenge our ideas about how and when a star loses its mass near the end of its life.

White dwarfs are the burned-out relics of ancient stars that rapidly shut down their nuclear furnaces, cooling down and losing mass at the end of their active lives. As these stellar carcasses age and shed mass, they are expelled from the densely packed centre of the globular cluster and migrate to wider orbits [1]. Whilst astronomers knew about this process, they had never seen it in action, until now.

Astronomers used Hubble to trace this stellar journey by studying 3000 white dwarfs in the globular star cluster 47 Tucanae, a dense swarm of hundreds of thousands of stars in the Milky Way.

“We’ve seen the final picture before: white dwarfs that have migrated and settled into more distant orbits outside the core, determined by their mass,” explained Jeremy Heyl of the University of British Columbia, Canada, first author on the science paper. “But in this study, which comprises about a quarter of all the young white dwarfs in the cluster, we’re actually catching the stars in the process of moving outward and distributing themselves appropriately according to mass.”

Using the ultraviolet capabilities of Hubble’s sharp-eyed Wide Field Camera 3 [2], the astronomers traced populations of white dwarfs with a range of ages. Using the colours of the stars, the astronomers can also estimate the age of each star [3]. One group of six-million-year-old stars has just begun its journey from the dense cluster centre. Another population is around 100 million years old and has already arrived at its new position, roughly 1.5 light-years from its starting point, and far from the cluster centre.

“Before becoming white dwarfs, the migrating stars were among the most massive in the cluster, roughly as massive as the Sun,” explained co-author Elisa Antolini of the Università degli Studi di Perugia, Italy. “We knew that as they lost mass we would see a migration to the outskirts; that wasn’t a surprise. But, what did surprise us was that the youngest white dwarfs were only just embarking on their journey. This could be evidence that the stars shed much of their mass at a later stage in their lives than we once thought, which is an exciting find.”

About 100 million years before stars evolve into white dwarfs, they swell up and become red giant stars. Many astronomers thought that stars lost most of their mass during this phase. However, if this were the case, the stars would already have been expelled from the centre of the cluster at the red giant stage.

“Our observations with Hubble found white dwarfs that are just beginning their migration to wider orbits,” explains team member Harvey Richer, also from the University of British Columbia, Canada. “This reveals that the migration of the stars from the centre — and the loss in their mass that has caused it — begins later in the star’s life than once thought. These white dwarfs are losing a large amount of mass just before they become white dwarfs and not during the earlier red giant phase.”

The new results imply that the stars actually lose 40 to 50 percent of their bulk just 10 million years before completely burning out as white dwarfs.

Studies into the mass segregation of white dwarfs will continue, and the 47 Tucanae cluster is an ideal place to do them due to its proximity to us and the significant number of stars at the cluster’s core that can be resolved by Hubble’s crisp vision.

[1] White dwarfs are forced out of the densely packed centre of the cluster by gravitational interactions with more massive stars.

[2] Although the white dwarfs have exhausted the hydrogen fuel that makes them shine as stars, their brilliant hot cores have been exposed which makes them very luminous in ultraviolet light. Only Hubble can detect these stars because ultraviolet light is blocked by Earth’s atmosphere and therefore does not reach ground-based telescopes.

[3] The astronomers estimated the white dwarfs’ ages by analysing their colours, which gives them the stars’ temperatures. The hottest and youngest white dwarfs shine fiercely in ultraviolet light. 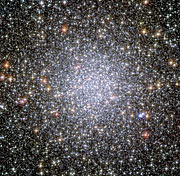 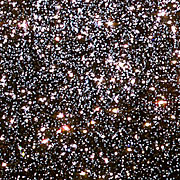 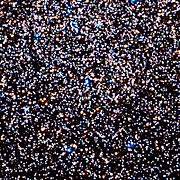