In the most extensive survey of its kind ever conducted, a team of scientists have found an unambiguous link between the presence of supermassive black holes that power high-speed, radio-signal-emitting jets and the merger history of their host galaxies. Almost all of the galaxies hosting these jets were found to be merging with another galaxy, or to have done so recently. The results lend significant weight to the case for jets being the result of merging black holes and will be presented in the Astrophysical Journal.

A team of astronomers using the NASA/ESA Hubble Space Telescope’s Wide Field Camera 3 (WFC3) have conducted a large survey to investigate the relationship between galaxies that have undergone mergers and the activity of the supermassive black holes at their cores.

The team studied a large selection of galaxies with extremely luminous centres — known as active galactic nuclei (AGNs) — thought to be the result of large quantities of heated matter circling around and being consumed by a supermassive black hole. Whilst most galaxies are thought to host a supermassive black hole, only a small percentage of them are this luminous and fewer still go one step further and form what are known as relativistic jets [1]. The two high-speed jets of plasma move almost with the speed of light and stream out in opposite directions at right angles to the disc of matter surrounding the black hole, extending thousands of light-years into space. The hot material within the jets is also the origin of radio waves.

It is these jets that Marco Chiaberge from the Space Telescope Science Institute, USA (also affiliated with Johns Hopkins University, USA and INAF-IRA, Italy) and his team hoped to confirm were the result of galactic mergers [2].

“We found that most merger events in themselves do not actually result in the creation of AGNs with powerful radio emission,” added co-author Roberto Gilli from Osservatorio Astronomico di Bologna, Italy. “About 40% of the other galaxies we looked at had also experienced a merger and yet had failed to produce the spectacular radio emissions and jets of their counterparts.”

“There are two ways in which mergers are likely to affect the central black hole. The first would be an increase in the amount of gas being driven towards the galaxy’s centre, adding mass to both the black hole and the disc of matter around it,” explains Colin Norman, co-author of the paper. “But this process should affect black holes in all merging galaxies, and yet not all merging galaxies with black holes end up with jets, so it is not enough to explain how these jets come about. The other possibility is that a merger between two massive galaxies causes two black holes of a similar mass to also merge. It could be that a particular breed of merger between two black holes produces a single spinning supermassive black hole, accounting for the production of jets.”

Future observations using both Hubble and the Atacama Large Millimeter/submillimeter Array (ALMA) are needed to expand the survey set even further and continue to shed light on these complex and powerful processes.

[1] Relativistic jets travel at close to the speed of light, making them one of the fastest astronomical objects known.

[2] The new observations used in this research were taken in collaboration with the 3CR-HST team. This international team of astronomers is currently led by Marco Chiaberge and has conducted a series of surveys of radio galaxies and quasars from the 3CR catalogue using the Hubble Space Telescope.

[3] The team compared their observations with the swathes of archival data from Hubble. They directly surveyed twelve very distant radio galaxies and compared the results with data from a large number of galaxies observed during other observing programmes.

[4] Other studies had shown a strong relationship between the merger history of a galaxy and the high levels of radiation at radio wavelengths that suggests the presence of relativistic jets lurking at the galaxy’s centre. However, this survey is much more extensive, and the results very clear, meaning it can now be said with almost certainty that radio-loud AGNs, that is, galaxies with relativistic jets, are the result of galactic mergers. 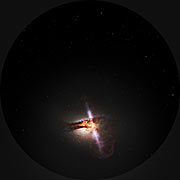