Although the Universe may seem spacious most galaxies are clumped together in groups or clusters and a neighbour is never far away. But this galaxy, known as NGC 6503, has found itself in a lonely position, shown here at the edge of a strangely empty patch of space called the Local Void. This new NASA/ESA Hubble Space Telescope image shows a very rich set of colours, adding to the detail seen in previous images.

NGC 6503 is only some 18 million light-years away from us in the constellation of Draco (The Dragon), making it one of the closest neighbours from our Local Group. It spans some 30 000 light-years, about a third of the size of the Milky Way. The galaxy’s lonely location led stargazer Stephen James O'Meara to dub it the “Lost-In-Space galaxy” in his 2007 book Hidden Treasures [1].

This galaxy does not just offer poetic inspiration; it is also the subject of ongoing research. The Hubble Legacy ExtraGalactic UV Survey (LEGUS) is exploring a sample of nearby galaxies, including NGC 6503, to study their shape, internal structure, and the properties and behaviour of their stars. This survey uses 154 orbits of time on Hubble; by contrast, a typical Hubble observing programme lasts from a few to a few tens of orbits.

The Local Void is a patch of space thought to be about 150 million light-years across that seems to be curiously devoid of galaxies. Astronomers using Hubble discovered that the emptiness of this region has quite an effect on the space around us — the Milky Way is being strongly pulled away from it by the gentle but relentless tug of other nearby galaxies.

NGC 6503 lies right on the edge of this void. It has an almost non-existent central bulge surrounded by a massive halo of gas. The galaxy’s central region is a good example of something known as a “low ionisation nuclear emission region”, or LINER. These are less luminous than some of the brightest galaxies. Emission from NGC 6503’s heart is believed to be the result of a starved black hole that is only just being kept active, receiving a very small amount of infalling gas to keep its large appetite at bay.

A previous image of NGC 6503 was released as a Hubble Picture of the Week back in 2010, taken by Hubble’s Advanced Camera for Surveys. However, this new image, taken using Hubble’s Wide Field Camera 3 (WFC3), shows NGC 6503 in striking detail and with a richer set of colours. Bright red patches of gas can be seen scattered through its swirling spiral arms, mixed with bright blue regions that contain newly-forming stars. Dark brown dust lanes snake across the galaxy’s bright arms and centre, giving it a mottled appearance.

Installed in 2009 during the final Hubble servicing mission, SM4, WFC3 covers a wide range of the spectrum, from the ultraviolet all the way through to the near-infrared. Compared with its predecessor, the Wide Field and Planetary Camera 2 (WFPC2), it offers improved resolution and a wider field of view, and has led to a large number of stunning Hubble images since its installation.

[1] This was also the name of a Hubble image processing competition run in 2012, which invited people to scour the Hubble archive for interesting and beautiful observations. 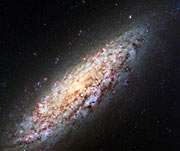 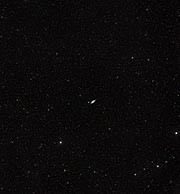