This quartet is composed of (from left to right) NGC 839, NGC 838, NGC 835, and NGC 833 — four of the seven galaxies that make up the entire group. They shine brightly with their glowing golden centres and wispy tails of gas [1], set against a background dotted with much more distant galaxies.

Compact groups represent some of the densest concentrations of galaxies known in the Universe, making them perfect laboratories for studying weird and wonderful phenomena. Hickson Compact Groups in particular, as classified by astronomer Paul Hickson in the 1980s, are surprisingly numerous, and are thought to contain an unusually high number of galaxies with strange properties and behaviours [2].

HCG 16 is certainly no exception. The galaxies within it are bursting with dramatic knots of star formation and intensely bright central regions. Within this single group, astronomers have found two LINERs, one Seyfert 2 galaxy and three starburst galaxies.

These three types of galaxy are all quite different, and can each help us to explore something different about the cosmos. Starbursts are dynamic galaxies that produce new stars at much greater rates than their peers. LINERs (Low-Ionisation Nuclear Emission-line Regions) contain heated gas at their cores, which spew out radiation. In this image NGC 839 is a LINER-type and luminous infrared galaxy and its companion NGC 838 is a LINER-type galaxy with lots of starburst activity and no central black hole.

The remaining galaxies, NGC 835 and NGC 833, are both Seyfert 2 galaxies which have incredibly luminous cores when observed at other wavelengths than in the visible light, and are home to active supermassive black holes.

The X-ray emission emanating from the black hole within NGC 833 (far right) is so high that it suggests the galaxy has been stripped of gas and dust by past interactions with other galaxies. It is not alone in having a violent history — the morphology of NGC 839 (far left) is likely due to a galactic merger in the recent past, and long tails of glowing gas can be seen stretching away from the galaxies on the right of the image.

This new image uses observations from Hubble's Wide Field Planetary Camera 2, combined with data from the ESO Multi-Mode Instrument installed on the European Southern Observatory’s New Technology Telescope in Chile. A version of this image was entered into the Hubble's Hidden Treasures image processing competition by contestants Jean-Christophe Lambry and Marc Canale.

[1] A tidal tail is a thin, elongated region of stars and interstellar gas that extends into space from a galaxy. They are a result of the strong gravitational forces around interacting galaxies. 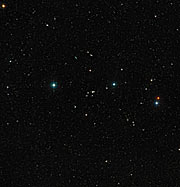