Unique structures spotted around nearby star

Using images from the NASA/ESA Hubble Space Telescope and ESO’s Very Large Telescope, astronomers have discovered never-before-seen structures within a dusty disc surrounding a nearby star. The fast-moving wave-like features in the disc of the star AU Microscopii are unlike anything ever observed, or even predicted, before now. The origin and nature of these features present a new mystery for astronomers to explore. The results are published in the journal Nature on 8 October 2015.

AU Microscopii, or AU Mic for short, is a young, nearby star surrounded by a large disc of dust [1]. Studies of such debris discs can provide valuable clues about how planets, which form from these discs, are created.

Astronomers have been searching AU Mic’s disc for any signs of clumpy or warped features, as such signs might give away the location of possible planets. And in 2014 they used the  powerful high-contrast imaging capabilities of ESO’s newly installed SPHERE instrument, mounted on the Very Large Telescope for their search — and discovered something very unusual.

“Our observations have shown something unexpected,” explains Anthony Boccaletti of the Observatoire de Paris, France, lead author on the paper. “The images from SPHERE show a set of unexplained features in the disc which have an arch-like, or wave-like, structure, unlike anything that has ever been observed before.”

Five wave-like arches at different distances from the star show up in the new images, reminiscent of ripples in water. After spotting the features in the SPHERE data the team turned to earlier images of the disc taken by the NASA/ESA Hubble Space Telescope in 2010 and 2011 to see whether the features were also visible in these [2]. They were not only able to identify the features on the earlier Hubble images — but they also discovered that they had changed over time. It turns out that these ripples are moving — and very fast!

“We reprocessed images from the Hubble data and ended up with enough information to track the movement of these strange features over a four-year period,” explains team member Christian Thalmann (ETH Zürich, Switzerland). “By doing this, we found that the arches are racing away from the star at speeds of up to about 40 000 kilometres/hour!”

The features further away from the star seem to be moving faster than those closer to it. At least three of the features are moving so fast that they could well be escaping from the gravitational attraction of the star. Such high speeds rule out the possibility that these are conventional disc features caused by objects — like planets — disturbing material in the disc while orbiting the star. There must have been something else involved to speed up the ripples and make them move so quickly, meaning that they are a sign of something truly unusual [3].

“Everything about this find was pretty surprising!” comments co-author Carol Grady of Eureka Scientific, USA. “And because nothing like this has been observed or predicted in theory we can only hypothesise when it comes to what we are seeing and how it came about.”

The team cannot say for sure what caused these mysterious ripples around the star. But they have considered and ruled out a series of phenomena as explanations, including the collision of two massive and rare asteroid-like objects releasing large quantities of dust, and spiral waves triggered by instabilities in the system’s gravity.

But other ideas that they have considered look more promising.

“One explanation for the strange structure links them to the star’s flares. AU Mic is a star with high flaring activity — it often lets off huge and sudden bursts of energy from on or near its surface,” explains co-author Glenn Schneider of Steward Observatory, USA. “One of these flares could perhaps have triggered something on one of the planets — if there are planets — like a violent stripping of material which could now be propagating through the disc, propelled by the flare’s force.”

“It is very satisfying that SPHERE has proved to be very capable at studying discs like this in its first year of operation,” adds Jean-Luc Beuzit, who is both a co-author of the new study and also led the development of SPHERE itself.

The team plans to continue to observe the AU Mic system with SPHERE and other facilities, including ALMA, to try to understand what is happening. But, for now, these curious features remain an unsolved mystery.

[1] AU Microscopii lies just 32 light-years away from Earth. The disc essentially comprises asteroids that have collided with such vigour that they have been ground to dust.

[3] The edge-on view of the disc complicates the interpretation of its three-dimensional structure.

This research was presented in a paper entitled “Fast-Moving Structures in the Debris Disk Around AU Microscopii”, to appear in the journal Nature on 8 October 2015. 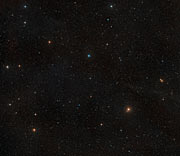