Single stars are often overlooked in favour of their larger cosmic cousins — but when they join forces, they create truly breathtaking scenes to rival even the most glowing of nebulae or swirling of galaxies. This NASA/ESA Hubble Space Telescope image features the star cluster Trumpler 14. One of the largest gatherings of hot, massive and bright stars in the Milky Way, this cluster houses some of the most luminous stars in our entire galaxy.

Around 1100 open clusters have so far been discovered within the Milky Way, although many more are thought to exist. Trumpler 14 is one of these, located some 8000 light-years away towards the centre of the well-known Carina Nebula.

At a mere 500 000 years old — a small fraction of the Pleiades open cluster’s age of 115 million years — Trumpler 14 is not only one of the most populous clusters within the Carina Nebula, but also the youngest. However, it is fast making up for lost time, forming stars at an incredible rate and putting on a stunning visual display.

This region of space houses one of the highest concentrations of massive, luminous stars in the entire Milky Way — a spectacular family of young, bright, white-blue stars. These stars are rapidly working their way through their vast supplies of hydrogen, and have only a few million years of life left before they meet a dramatic demise and explode as supernovae. In the meantime, despite their youth, these stars are making a huge impact on their environment. They are literally making waves!

As the stars fling out high-speed particles from their surfaces, strong winds surge out into space. These winds collide with the surrounding material, causing shock waves that heat the gas to millions of degrees and trigger intense bursts of X-rays. These strong stellar winds also carve out cavities in nearby clouds of gas and dust, and kickstart the formation of new stars.

The peculiar arc-shaped cloud visible at the very bottom of this image is suspected to be the result of such a wind. This feature is thought to be a bow shock created by the wind flowing from the nearby star Trumpler 14 MJ 218. Astronomers have observed this star to be moving through space at some 350 000 kilometres per hour, sculpting the surrounding clumps of gas and dust as it does so.

Astronomers estimate that around 2000 stars reside within Trumpler 14, ranging in size from less than one tenth to up to several tens of times the mass of the Sun. The most prominent star in Trumpler 14, and the brightest star in this image, is the supergiant HD 93129Aa [1]. It is one of the most brilliant and hottest stars in our entire galaxy.

[1] HD 93129Aa is part of the binary star system HD 93129AaAb consisting of HD 93129Aa and HD 93129Ab. HD 93129Aa is an O-type star that is approximately two and a half million times brighter than the Sun, and has a mass 80 times greater. It forms a close binary with another massive star within the open cluster, meaning that the two orbit around a shared centre of mass. With a surface temperature of over 50 000 degrees, HD 93129Aa is one of the hottest O-type stars in the entire Milky Way. 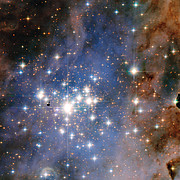 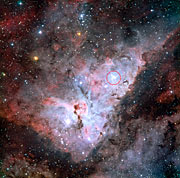