Journey to the centre of our galaxy

Peering deep into the heart of our home galaxy, the Milky Way, the NASA/ESA Hubble Space Telescope reveals a rich tapestry of more than half a million stars. Apart from a few, blue, foreground stars, almost all of the stars pictured in the image are members of the Milky Way nuclear star cluster, the densest and most massive star cluster in the galaxy. Hidden in the centre of this cluster is the Milky Way’s resident supermassive black hole.

The centre of the Milky Way, 27 000 light-years away in the constellation of Sagittarius, is a crowded place. This region is so tightly packed that it is equivalent to having one million stars crammed into the volume of space between us and Alpha Centauri, located 4.3 light-years away. At the very hub of our galaxy, this dense nuclear star cluster surrounds the Milky Way’s central supermassive black hole, known as Sagittarius A*, which alone is about four million times the mass of the Sun.

Sagittarius A* is not the only mystery lurking in this part of the galaxy. The crowded centre contains numerous objects that are hidden at visible wavelengths by thick clouds of dust in the galaxy’s disc. In order to truly understand the central part of our galaxy astronomers used the infrared vision of Hubble to peer through this obscuring dust. To reveal the image in all its glory the scientists then assigned visible colours to the different wavelengths of infrared light, which is invisible to human eyes.

The blue stars in the image are foreground stars, which are closer to Earth than the nuclear star cluster, whilst the red stars are either behind much more intervening dust, or are embedded in dust themselves. Some extremely dense clouds of gas and dust are seen in silhouette, appearing dark against the bright background stars. These clouds are so thick that even Hubble’s infrared capability cannot penetrate them. In addition to the stars hidden by the dust astronomers estimate that there are about 10 million stars in the cluster which are too faint to see, even for Hubble.

Using Hubble’s vantage point above the atmosphere and its high resolution, astronomers were able not only to reveal the stars in this cluster but also to measure their movements over a period of four years. Using this information, they inferred important properties of the nuclear star cluster, such as its mass and structure. The motion of the stars may also offer astronomers a glimpse into how the nuclear star cluster was formed — whether it was built up over time from globular star clusters that happened to fall into the centre of the galaxy, or from gas spiralling in from the Milky Way’s disc to form stars at the core.

The data for this picture was gathered in September 2011 and is a mosaic stitched together from nine separate images taken with the Wide Field Camera 3 (WFC3). 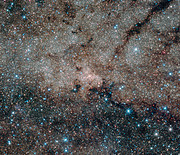 PR Video heic1606a
Zoom in to the galactic centre