Lensed supernova will give insight into the expansion of the Universe

A Swedish-led team of astronomers used the NASA/ESA Hubble Space Telescope to analyse the multiple images of a gravitationally lensed type Ia supernova for the first time. The four images of the exploding star will be used to measure the expansion of the Universe. This can be done without any theoretical assumptions about the cosmological model, giving further clues about how fast the Universe is really expanding. The results are published in the journal Science.

An international team, led by astronomers from the Stockholm University, Sweden, has discovered a distant type Ia supernova, called iPTF16geu [1] — it took the light 4.3 billion years to travel to Earth [2]. The light from this particular supernova was bent and magnified by the effect of gravitational lensing so that it was split into four separate images on the sky [3]. The four images lie on a circle with a radius of only about 3000 light-years around the lensing foreground galaxy, making it one of the smallest extragalactic gravitational lenses discovered so far. Its appearance resembles the famous Refsdal supernova, which astronomers detected in 2015 (heic1525). Refsdal, however, was a core-collapse supernova.

Type Ia supernovae always have the same intrinsic brightness, so by measuring how bright they appear astronomers can determine how far away they are. They are therefore known as standard candles. These supernovae have been used for decades to measure distances across the Universe, and were also used to discover its accelerated expansion and infer the existence of dark energy. Now the supernova iPTF16geu allows scientists to explore new territory, testing the theories of the warping of spacetime on smaller extragalactic scales than ever before.

“Resolving, for the first time, multiple images of a strongly lensed standard candle supernova is a major breakthrough. We can measure the light-focusing power of gravity more accurately than ever before, and probe physical scales that may have seemed out of reach until now,” says Ariel Goobar, Professor at the Oskar Klein Centre at Stockholm University and lead author of the study.

The critical importance of the object meant that the team instigated follow-up observations of the supernova less than two months after its discovery. This involved some of the world’s leading telescopes in addition to Hubble: the Keck telescope on Mauna Kea, Hawaii, and ESO’s Very Large Telescope in Chile. Using the data gathered, the team calculated the magnification power of the lens to be a factor of 52. Because of the standard candle nature of iPTF16geu, this is the first time this measurement could be made without any prior assumptions about the form of the lens or cosmological parameters.

Currently the team is in the process of accurately measuring how long it took for the light to reach us from each of the four images of the supernova. The differences in the times of arrival can then be used to calculate the Hubble constant — the expansion rate of the Universe — with high precision [4]. This is particularly crucial in light of the recent discrepancy between the measurements of its value in the local and the early Universe (heic1702).

As important as lensed supernovae are for cosmology, it is extremely difficult to find them. Not only does their discovery rely on a very particular and precise alignment of objects in the sky, but they are also only visible for a short time. “The discovery of iPTF16geu is truly like finding a somewhat weird needle in a haystack,” remarks Rahman Amanullah, co-author and research scientist at Stockholm University. “It reveals to us a bit more about the Universe, but mostly triggers a wealth of new scientific questions.”

Studying more similarly lensed supernovae will help shape our understanding of just how fast the Universe is expanding. The chances of finding such supernovae will improve with the installation of new survey telescopes in the near future.

[1] iPTF16geu was initially observed by the iPTF (intermediate Palomar Transient Factory) collaboration with the Palomar Observatory. This is a fully automated, wide-field survey delivering a systematic exploration of the optical transient sky.

[3] Gravitational lensing is a phenomenon that was first predicted by Albert Einstein in 1912. It occurs when a massive object lying between a distant light source and the observer bends and magnifies the light from the source behind it. This allows astronomers to see objects that would otherwise be to faint to see.

[4] For each image of the supernova, the light is not bent in the same way. This results in slightly different travel times. The maximum time delay between the four images is predicted to be less than 35 hours.

This research was presented in a paper entitled “iPTF16geu: A multiply-imaged gravitationally lensed Type Ia supernova” by Goobar et al., which appeared in the journal Science. 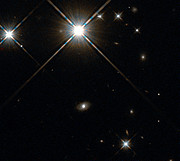 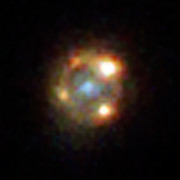 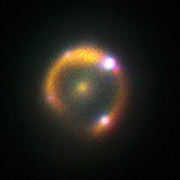