Observations may hint at nature of dark matter

Using the NASA/ESA Hubble Space Telescope, astronomers have discovered that the brightest galaxies within galaxy clusters “wobble” relative to the cluster’s centre of mass. This unexpected result is inconsistent with predictions made by the current standard model of dark matter. With further analysis it may provide insights into the nature of dark matter, perhaps even indicating that new physics is at work.

Dark matter constitutes just over 25 percent of all mass-energy in the Universe but cannot be directly observed, making it one of the biggest mysteries in modern astronomy. Invisible halos of elusive dark matter enclose galaxies and galaxy clusters alike. The latter are massive groupings of up to a thousand galaxies immersed in hot intergalactic gas. Such clusters have very dense cores, each containing a massive galaxy called the “brightest cluster galaxy” (BCG).

The standard model of dark matter (cold dark matter model) predicts that once a galaxy cluster has returned to a “relaxed” state after experiencing the turbulence of a merging event, the BCG does not move from the cluster’s centre. It is held in place by the enormous gravitational influence of dark matter.

But now, a team of Swiss, French, and British astronomers have analysed ten galaxy clusters observed with the NASA/ESA Hubble Space Telescope, and found that their BCGs are not fixed at the centre as expected [1].

“We found that the BCGs wobble around centre of the halos,” explains David Harvey, astronomer at EPFL, Switzerland, and lead author of the paper. “This indicates that, rather than a dense region in the centre of the galaxy cluster, as predicted by the cold dark matter model, there is a much shallower central density. This is a striking signal of exotic forms of dark matter right at the heart of galaxy clusters.”

The wobbling of the BCGs could only be analysed as the galaxy clusters studied also act as gravitational lenses. They are so massive that they warp spacetime enough to distort light from more distant objects behind them. This effect, called strong gravitational lensing, can be used to make a map of the dark matter associated with the cluster, enabling astronomers to work out the exact position of the centre of mass and then measure the offset of the BCG from this centre.

If this “wobbling” is not an unknown astrophysical phenomenon and in fact the result of the behaviour of dark matter, then it is inconsistent with the standard model of dark matter and can only be explained if dark matter particles can interact with each other — a strong contradiction to the current understanding of dark matter. This may indicate that new fundamental physics is required to solve the mystery of dark matter.

Co-author Frederic Courbin, also at EPFL, concludes: “We’re looking forward to larger surveys — such as the Euclid survey — that will extend our dataset. Then we can determine whether the wobbling of BGCs is the result of a novel astrophysical phenomenon or new fundamental physics. Both of which would be exciting!”

[1] The study was performed using archive data from Hubble. The observations were originally made for the CLASH and LoCuSS surveys.

This research was presented in a paper entitled “A detection of wobbling Brightest Cluster Galaxies within massive galaxy clusters” by Harvey et al., which appeared in the Monthly Notices of the Royal Astronomical Society. 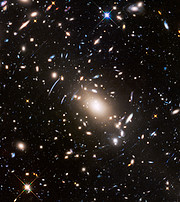 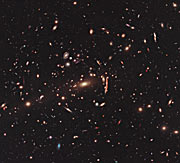 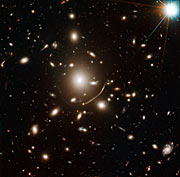 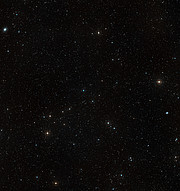 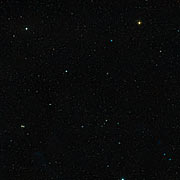