Resembling a swarm of flickering fireflies, this beautiful galaxy cluster glows intensely in the dark cosmos, accompanied by the myriad bright lights of foreground stars and swirling spiral galaxies. A1758N is a sub-cluster of Abell 1758, a massive cluster containing hundreds of galaxies. Although it may appear serene in this NASA/ESA Hubble Space Telescope image, the sub-cluster actually comprises two even smaller structures currently in the turbulent process of merging.

Although often overshadowed by its more famous cousins — including the Fornax Cluster and Pandora’s Cluster — Abell 1758 contains more than its fair share of intrigue. The cluster was first identified in 1958, and initially logged as a single massive object. However, some 40 years later the cluster was observed again by the ROSAT satellite X-ray telescope, and astronomers spotted something peculiar: the cluster was not a single concentration of galaxies, but two!

Abell 1758 has since been observed many more times by various observatories — Hubble, NASA’s Chandra X-ray Observatory, ESA’s XMM-Newton, and more — and is now known to have both a double structure and a complex history. It contains two massive sub-clusters sitting some 2.4 million light-years apart. These components, known as A1758N (North) and A1758S (South), are bound together by gravity but without showing signs of interacting.

In this Hubble image only the northern structure of the cluster, A1758N, is visible. A1758N is further split into two sub-structures, known as East (A1758NE) and West (A1758NW). There appear to be disturbances within each of of the two sub-clusters of A1758A — strong evidence that they are the result of smaller clusters colliding and merging.

Studies have also revealed a radio halo and two radio relics within Abell 1758. Through Hubble’s eyes these radio structures are invisible, but radio telescopes reveal an oddly-shaped halo of emission around the cluster. Radio halos are vast sources of diffuse radio emission usually found around the centres of galaxy clusters. They are thought to form when clusters collide and accelerate fast-moving particles to even higher speeds, implying that clusters with radio halos are still forming and merging.

Collisions such as the one A1758N is undergoing are the most energetic events in the Universe apart from the Big Bang itself. Understanding how clusters merge helps astronomers to understand how structures grow and evolve in the Universe. It also helps them to study dark matter, the intracluster medium and galaxies, and to explore how these three components interact — particularly during mergers.

This image was taken by Hubble’s Advanced Camera for Surveys (ACS) and Wide Field Camera 3 (WFC3) as part of an observing programme called RELICS. The programme is imaging 41 massive galaxy clusters, using them as cosmic lenses to search for bright distant galaxies. These will then be studied in more detail using both current telescopes and the future NASA/ESA/CSA James Webb Space Telescope. 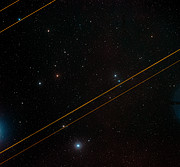