Beauty, grace, mystery — this magnificent spiral galaxy has all the qualities of a perfect galactic Valentine. Captured by the NASA/ESA Hubble Space Telescope, the galaxy NGC 3344 presents itself face-on, allowing astronomers a detailed look at its intricate and elegant structure. And Hubble’s ability to observe objects over a wide range of different wavelengths reveals features that would otherwise remain invisible.

Spiral galaxies are some of the most spectacular sights in the sky, but to an observer they do not all look the same. Some are seen edge-on, giving astronomers an excellent idea of the galaxy’s vertical structure; others are seen at an angle, providing a hint of the size and structure of the spiral arms; while others are seen face-on, showcasing their arms and bright core in all their beauty.

Approximately 20 million light-years away in the constellation of Leo Minor (the Lion Cub), NGC 3344 is seen from a breathtaking face-on perspective. Half the size of the Milky Way, it is classified as a weakly barred spiral galaxy. The central bar is just visible in this image, taken with Hubble’s Wide Field Camera 3: an elongated lane of stars, trailing through the nucleus of the galaxy. Astronomers estimate that two-thirds of all spiral galaxies are barred, including our own Milky Way.

Hubble’s capacity to observe celestial objects in different wavelengths allows us to see more than just the spiral arms sweeping out loosely around the centre in a gorgeous whorl. This image is a composite of images taken through different filters, ranging from the near ultraviolet, to the optical and the near-infrared. Together they show a more complete picture of the galaxy than the human eye alone could possibly see.

The swirling spiral arms are the birthplace of new stars, whose high temperatures make them shine blue, resulting in them being easily identifiable in this image. Clouds of dust and gas distributed through the spiral arms — glowing red in this image — are reservoirs of material for even more stars. The bright jewel-like stars on the left of the picture, however, are much closer to Earth — they belong to our own galaxy and just happened to photobomb this Hubble image.

While its face-on orientation reveals much about NGC 3344’s detailed structure, this galaxy is still enigmatic; astronomers have noticed that some of its outer stars are moving in a strange way. Often, the high concentration of stars in the centre of a galaxy can affect the movements of the outer stars, but this does not seem to be the case in NGC 3344. Astronomers suspect that these weirdly behaving outer stars may actually have been stolen from another galaxy, after a close encounter that took place long ago.

The location of NGC 3344 is also intriguing. Our galaxy is part of the Local Group, which is made up of approximately 40 other galaxies, with the Andromeda Galaxy being the largest member. But NGC 3344 is not part of a local galactic neighbourhood like we are. It is actually part of a small spur that leads off the larger Virgo Supercluster — a gargantuan collection of several thousand galaxies.

But it stands out from these thousands of galaxies because of its beauty, which highlights to us the elegance of the Universe. 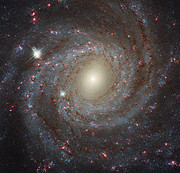 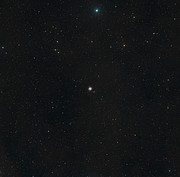