Hubble offers a special view of the double star system Eta Carinae’s expanding gases glowing in red, white, and blue. This is the highest resolution image of Eta Carinae taken by the NASA/ESA Hubble Space Telescope.

Imagine slow-motion fireworks that started exploding nearly two centuries ago and haven’t stopped since then. This is how you might describe this double star system located 7500 light-years away in the constellation Carina (The Ship’s Keel). In 1838 Eta Carinae underwent a cataclysmic outburst called the Great Eruption, quickly escalating to become in 1844 the second brightest star in the sky by April of that year. The star has since faded, but this new view from the NASA/ESA Hubble Space Telescope shows that the spectacular display is still ongoing, and reveals details that have never been seen before.

Violent mass ejections are not uncommon in Eta Carinae’s history; the system has been blighted by chaotic eruptions, often blasting parts of itself into space. But the Great Eruption was particularly dramatic. The larger of the two stars is a massive, unstable star nearing the end of its life, and what astronomers witnessed over a century and a half ago was, in fact, a stellar near-death experience.

The resulting surge of light was outshone only by Sirius, which is almost one thousand times closer to Earth, and for a time made Eta Carinae an important navigation star for mariners in the southern seas. This close call stopped just short of destroying Eta Carinae, and the light intensity gradually subsided. Researchers studying the star today can still see the signature of the Great Eruption on its surroundings; the huge dumbbell shape is formed of the dust and gas and other filaments that were hurled into space in the expulsion. These hot glowing clouds are known as the Homunculus Nebula, and have been a target of Hubble since its launch in 1990.

In fact, the volatile star has been imaged by almost every instrument on Hubble over more than 25 years. Astronomers have observed the cosmic drama play out in ever higher resolution. This latest image was created using Hubble’s Wide Field Camera 3 to map warm magnesium gas glowing in ultraviolet light (shown in blue).

Scientists have long known that the outer material thrown off in the 1840s eruption has been heated by shock waves generated when it crashed into material previously ejected from the star . The team who captured this new image were expecting to find light from magnesium coming from the complicated array of filaments seen in the light from glowing nitrogen (shown in red). Instead, a whole new luminous magnesium structure was found in the space between the dusty bipolar bubbles and the outer shock-heated nitrogen-rich filaments.

“We’ve discovered a large amount of warm gas that was ejected in the Great Eruption but hasn’t yet collided with the other material surrounding Eta Carinae,” explained Nathan Smith of Steward Observatory at the University of Arizona, lead investigator of the Hubble programme. “Most of the emission is located where we expected to find an empty cavity. This extra material is fast, and it ‘ups the ante’ in terms of the total energy of an already powerful stellar blast.”

This newly revealed data is important for understanding how the eruption began, because it represents the fast and energetic ejection of material that may have been expelled by the star shortly before the expulsion of the rest of the nebula. Astronomers need more observations to measure exactly how fast the material is moving and when it was ejected.

Another striking feature of the image is the streaks visible in the blue region outside the lower-left bubble. These streaks appear where the star’s light rays poke through the dust clumps scattered along the bubble’s surface. Wherever the ultraviolet light strikes the dense dust, it leaves a long thin shadow that extends beyond the lobe into the surrounding gas. “The pattern of light and shadow is reminiscent of sunbeams that we see in our atmosphere when sunlight streams past the edge of a cloud, though the physical mechanism creating Eta Carinae’s light is different,” noted team member Jon Morse of BoldlyGo Institute in New York.

This technique of searching in ultraviolet light for warm gas could be used to study other stars and gaseous nebulae, the researchers say.

“We had used Hubble for decades to study Eta Carinae in visible and infrared light, and we thought we had a pretty full account of its ejected debris. But this new ultraviolet-light image looks astonishingly different, revealing gas we did not see in either visible-light or infrared images,” Smith said. “We’re excited by the prospect that this type of ultraviolet magnesium emission may also expose previously hidden gas in other types of objects that eject material, such as protostars or other dying stars; and only Hubble can take these kinds of pictures”.

The causes of Eta Carinae’s Great Eruption remain the subject of speculation and debate. A recent theory suggests that Eta Carinae, which may once have weighed as much as 150 Suns, started out as a triple system, and the 1840s mass ejection was triggered when the primary star devoured one of its companions, rocketing more than ten times the mass of our Sun into space. While the exact circumstances of that show-stopping burst of light remain a mystery for now, astronomers are more certain of how this cosmic light show will conclude. Eta Carinae’s fireworks display is fated to reach its finale when it explodes as a supernova, greatly surpassing even its last powerful outburst. This may already have happened, but the tsunami of light from such a blinding blast would take 7500 years to reach Earth.

Previous images of Eta Carinae from the Hubble Space Telescope: 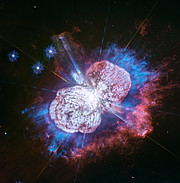 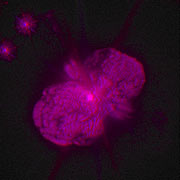