The 11-Jupiter-mass exoplanet called HD106906 b occupies an unlikely orbit around a double star 336 light-years away and it may be offering clues to something that might be much closer to home: a hypothesized distant member of our Solar System dubbed “Planet Nine.” This is the first time that astronomers have been able to measure the motion of a massive Jupiter-like planet that is orbiting very far away from its host stars and visible debris disc.

The exoplanet HD106906 b was discovered in 2013 with the Magellan Telescopes at the Las Campanas Observatory in Chile’s Atacama Desert. However, astronomers did not then know anything about the planet’s orbit. This required something only the Hubble Space Telescope could do: collect very accurate measurements of the vagabond’s motion over 14 years with extraordinary precision.

The exoplanet resides extremely far from its host pair of bright, young stars — more than 730 times the distance of Earth from the Sun. This wide separation made it enormously challenging to determine the 15 000-year-long orbit in such a short time span of Hubble observations. The planet is creeping very slowly along its orbit, given the weak gravitational pull of its very distant parent stars.

The Hubble team behind this new result [1] was surprised to find that the remote world has an extreme orbit that is very inclined, elongated and external to a dusty debris disc that surrounds the exoplanet’s twin host stars. The debris disc itself is very extraordinary, perhaps due to the gravitational tug of the rogue planet. This study was led by Meiji Nguyen of the University of California, Berkeley.

“To highlight why this is weird, we can just look at our own Solar System and see that all of the planets lie roughly in the same plane,” explained Nguyen. “It would be bizarre if, say, Jupiter just happened to be inclined 30 degrees relative to the plane that every other planet orbits in. This raises all sorts of questions about how HD 106906 b ended up so far out on such an inclined orbit.”

The scenario to explain HD106906 b’s bizarre orbit is similar in some ways to what may have caused the hypothetical Planet Nine to end up in the outer reaches of our own Solar System, beyond the Kuiper Belt. Planet Nine could have formed in the inner Solar System and was then kicked out by interactions with Jupiter. However, Jupiter would very likely have flung Planet Nine far beyond Pluto. Passing stars may have stabilised the orbit of the kicked-out planet by pushing the orbit path away from Jupiter and the other planets in the inner Solar System.

“It’s as if we have a time machine for our own Solar System going back 4.6 billion years to see what may have happened when our young Solar System was dynamically active and everything was being jostled around and rearranged,” explained team member Paul Kalas of the University of California, Berkeley.

To date, astronomers have only circumstantial evidence for the existence of Planet Nine. They’ve found a cluster of small celestial bodies beyond Neptune that move in unusual orbits compared to the rest of the Solar System. This configuration, some astronomers think, suggests that these objects were shepherded together by the gravitational pull of a huge, unseen planet. An alternative hypothesis is that there is not one giant perturber, but instead the imbalance is due to the combined gravitational influence of much smaller objects.

“Despite the lack of detection of Planet Nine to date, the orbit of the planet can be inferred based on its effect on the various objects in the outer Solar System,” explained team member Robert De Rosa of the European Southern Observatory in Santiago, Chile who led the study’s analysis. “This suggests that if a planet was indeed responsible for what we observe in the orbits of trans-Neptunian objects it should have an eccentric orbit inclined relative to the plane of the Solar System. This prediction of the orbit of Planet Nine is similar to what we are seeing with HD 106906b."

Scientists using the upcoming NASA/ESA/CSA James Webb Space Telescope plan to get additional data on HD106906 b to better understand the planet’s system. Astronomers want to know where and how the planet formed and whether the planet has its own debris system around it, among other questions.

“There are still a lot of open questions about this system,” added De Rosa. “For example, we do not conclusively know where or how the planet formed. Although we have made the first measurement of orbital motion, there are still large uncertainties on the various orbital parameters. It is likely that both observers and theorists alike will be studying HD 106906 for years to come, unraveling the many mysteries of this remarkable planetary system.”

These results have been published in the Astronomical Journal.

The international team of astronomers in this study consists of M. Nguyen, R. De Rosa, and P. Kalas. 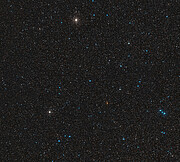