Closing in on distant, infant galaxies

Detailed proposals for the construction of the Next Generation Space Telescope (NGST) were presented during the yearly NGST meeting. Representatives from the three major participants in the project, NASA, ESA, and CSA discussed scientific ideas and technological possibilities for 'the space observatory of the next decade'. NGST will be launched in late 2007 or early 2008.

The original idea that started NGST was a wish 'to visit the time when galaxies were young'. Or in other words to continue where Hubble Space Telescope (HST) leaves off. HST has observed galaxies back to when the Universe was only a tenth of its present age, but it was discovered that though these galaxies were in their childhood, they were in no way in their infancy. What is really behind galaxy birth and evolution remains a mystery, and as more facts are unveiled, the story of galaxy formation becomes more and more complex. To probe even deeper into the Universe, it is necessary to see to higher redshift (all objects in the Universe look redder the farther away they are) - and this is where NGST comes in.

In many ways NGST can be seen as a continuation, or a complement, to the spaceborne observatories which exist today or are under development. NGST's need to see the redshifted galaxies calls for measurements in infrared light. ESA's ISO (Infrared Space Observatory) has been very successful in making observations in infrared light, and in many respects NGST will continue and expand on this work.

The plans for NGST have now matured to such a degree that numerous fairly detailed suggestions for the different parts of NGST were presented. The basic ideas were generally agreed upon: NGST will be a very large telescope - 8 metres in diameter - with the capacity to record extremely faint light in the infrared (also known as heat radiation). Due to current limitations in the size of rockets, its mirror will have to be segmented and unfolded after launch.

The scientists all agree that the natural arena for the next decade of astronomical discoveries will be the infrared domain. As the Dutch astronomer from Leiden Observatory, Ewine van Dishoeck elegantly puts it: 'The last few years of discoveries have shown us that there are enormous amounts of dust both in the local and in the distant Universe. In the infrared NGST will enable us to probe deep within the dusty clouds and find the true origin of the galaxies, the stars and the planets'. The increase in sensitivity over existing telescopes will be from a factor of more than a 100 to infinity, since some of the wavelengths hitherto have been hidden completely from our view from the ground. She continues: 'We will be able to see organic molecules and planetary systems forming around newborn stars'.

Canadian astronomer Simon Lilly talked with passion of the perspectives of taking very deep images each lasting hundreds of hours: 'NGST will literally enable us to see the first light in the Universe! We will be able to see the first stars and galaxies form.'

Incredible technological challenges are to be faced during the development of NGST. To mention a few:

NGST will essentially have to be deep-frozen because of its infrared instruments - how will it be possible to make the very advanced equipment work at -2400°C? Let alone make instruments and electronics continue to work under these extreme conditions for five or ten years? How can an 8 metre mirror possibly be built so it can be folded like petals in a flower, and then unfolded precisely enough to allow the astronomers to do high precision astronomy? And how can the entire NGST be compressed to the size of Hubble and to a third of its weight, despite the fact that the NGST mirror is much larger? How will it be able to build a solar shield that can unfold to the size of a tennis court?

Current plans for financing NGST foresee a possible ESA participation at the 15% level - as with the HST. The Canadian CSA plans to participate at the 5% level.

With regard to the future collaboration a so-called 'partnership concept document' has been signed by ESA and NASA which outlines the framework for ESA's extension of the current HST participation and possible involvement in NGST. Although this document is not yet a formal agreement, it clearly demonstrates ESA's strong wish to participate in this very important project. The final confirmation will await decisions to be made in the 2001/2002 timeframe. 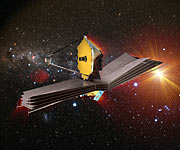