Hubble reopens eye on the Universe

The NASA/ESA Hubble Space Telescope is back in business, as made dramatically evident in stunning new celestial pictures of remote galaxies and a colourful dying star released today.

The images were taken 10 to 13 January 2000 as part of the recommissioning activities for the earth-orbiting telescope.

The pictures are a culmination of the successful Space Shuttle servicing mission (STS-103) last December, which restored the NASA/ESA premier optical space observatory to full capability, beefed-up with new electronics and critically needed replacement gyroscopes. Hubble has now resumed probing the Universe's many mysteries with a crystal-clear view.

'After a two-month hiatus, it is a tremendous boost to all of astronomy to see Hubble back in action. NASA has restored the observatory to a condition that was better than it was even before the fourth gyroscope died,' says Steven Beckwith, Director of the Space Telescope Science Institute, the Hubble science operations centre in Baltimore, Md., USA.

To verify the telescope's refurbishment, astronomers resumed operations by aiming it at two scientifically intriguing and photogenic celestial targets. One object is an intricate structure of shells and streamers of gas around a dying sun-like star 5,000 light-years away.

In Hubble's sharp view of NGC 2392, the 'furry' features resemble giant comets all radially pointing away from the central star, like the spokes of a wheel. 'The clumps that form the comet heads all seem to be located at a similar distance from the star. This fact will be important in developing a theory of why the clumps formed in the first place,' says planetary nebula expert J. Patrick Harrington of the University of Maryland, College Park. He adds, 'Of all the planetary nebulae imaged by the Hubble Space Telescope, this new image is unsurpassed in subtle beauty.'

A second target is a massive cluster of galaxies called Abell 2218, which acts like a giant zoom lens in space. The gravitational field of the cluster magnifies the light of more distant galaxies far behind it, providing a deep probe of the very distant universe. The cluster was imaged in full colour, providing astronomers with a spectacular and unique new view of the early universe.

'For the first time we can view the internal colour structure of some very distant galaxies. This gives us new insight into details of what young galaxies are like,' says Richard Ellis at the California Institute of Technology, Pasadena, and University of Cambridge, England and a co-investigator on an earlier (2-colour) Hubble image of Abell 2218 taken in 1994. 'The colour of a distant source is preserved by gravitational lensing. By matching images of the same colour, families of multiple images produced by the lensing process can be identified.'

Andrew Fruchter, leader of the team who took the early release observations, is particularly fascinated by an unusual red feature in the field. 'This extraordinary object has colours which indicate it is one of two things, either a rare extremely cool dwarf star in our own galaxy, or one of the most distant objects ever viewed by Hubble lensed into visibility by the mass of the cluster', says Fruchter. Further observations will be needed to confirm the identity of this unusual object.

Spacecraft operators report that all the new equipment installed on the telescope in December is working perfectly including the new computer, solid state recorder, and fine guidance sensor. In particular the new gyroscopes are allowing Hubble to reliably point with exquisite precision at celestial objects.

Two key science instruments, the Wide Field and Planetary Camera 2 and the Space Telescope Imaging Spectrograph are now being used for routine science observations by astronomers worldwide to probe everything from planets, to black holes, to far flung galaxies.

The processing of the data was carried out by a small team in Baltimore which included one of the Space Telescope European Coordinating Facility (ST-ECF) staff and used software developed in collaboration between STScI and the ST-ECF.

This news note has been prepared in collaboration with Office of Public Outreach at ST ScI (Ray Villard). 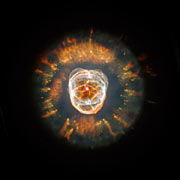